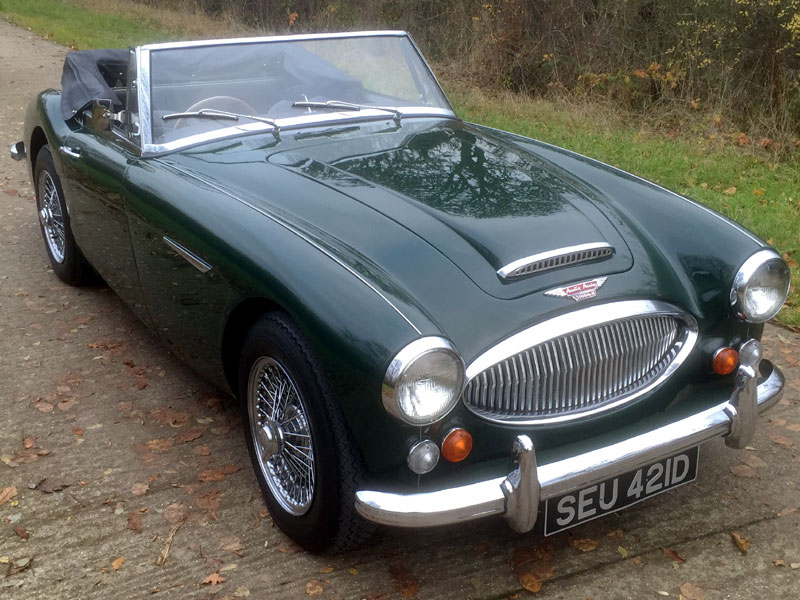 Originally an export model, this gorgeous 'Big' Healey vacated the production line in May 1966 bound for Philadelphia and stayed across the pond until repatriated in 2004; at which point the odometer stood at 74,500 miles. It then remained unused as part of a private collection until 2010, immediately prior to which it was treated to a professional ground-up restoration to show standard, and converted to righthand drive. It is finished in the classic combination of British Racing Green bodywork and Black interior trim and boasts overdrive and chrome wire wheels, as well as such performance upgrades as: stainless steel exhaust system, alloy fuel tank and radiator, oil cooler, high torque starter, and electronic ignition system. The mileage now totals an unwarranted 79,000 miles and the vendor currently considers the bodywork, paintwork, interior trim, straight-six engine and four-speed transmission as all being in 'very good condition'. The Healey comes complete with various receipts for work carried out and an MOT valid into November of next year. A seemingly fine example of the final iteration of one of the most sought after British classics.

The 'Big' Healey enjoyed steady development, with the four-cylinder cars giving way to the 100-Six of 1956, which was replaced by the first of the 3000s in 1959. The final iteration was the 3000 MKIII, which was launched in October 1963 and mildly upgraded (Phase 2) in May the following year. The most powerful and luxurious of all the derivatives, it had lively performance courtesy of its 150bhp straight-six engine and featured such niceties as wind up windows and a walnut-veneer facia. 3000 production closed at the end of 1967 after 42,926 had been made, 17,712 of which were MKIIIs. Motor magazine's road test of the MKIII recorded a 0-60mph time of 9.8 seconds and a top speed of 122.5mph.