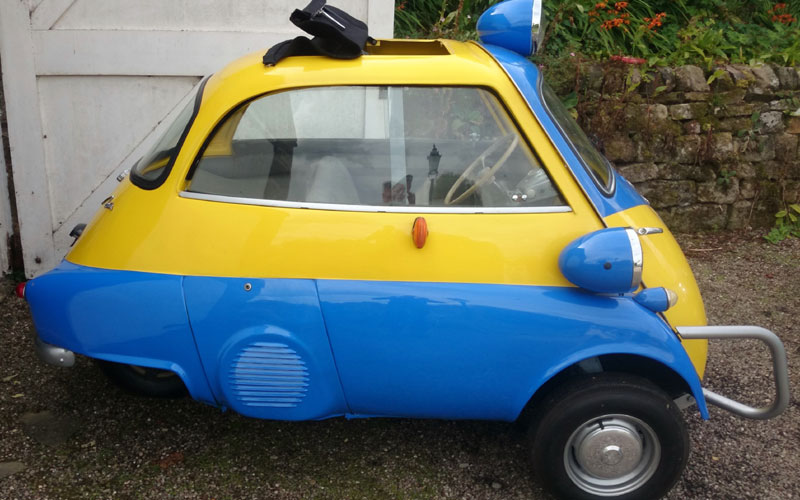 - Steering, Suspension and Engine overhauled in the 1990s

Microcars were born of the need for cheap short-distance transportation in the post-war years. The most successful was the Isetta, whose origins lay with the Italian firm of Iso SpA (Isetta is Italian for 'little Iso'), who went on to build some 1,000 or so. Many more were manufactured under licence in France, Belgium, Brazil, Britain and Germany, where they were manufactured by BMW, who made the model their own. Indeed, they re-engineered so much that none of the parts between a BMW Isetta and Iso Isetta are interchangeable. The 300 model was introduced in 1956, the obvious difference being the increase in capacity from 250cc to 298cc, raising output from 12bhp to 13bhp. While the torque improved, the top speed remained the same at 53mph.

The sale car is a left-hand drive three-wheeled example manufactured in 1961 and imported to the UK in 1983. It was originally Red but these days sports eye-catching Yellow and Blue paintwork and is trimmed in Grey vinyl. The engine was apparently overhauled in 1996, while the suspension and steering were reconditioned in 1997, and the body repainted in 2010. A charming addition to any collection that currently displays an unwarranted 34,600 miles.

PLEASE NOTE: This lot has suffered a small electric fire due to the battery terminals contacting the seat frame. There is damage to the seat and the battery has now been disconected.