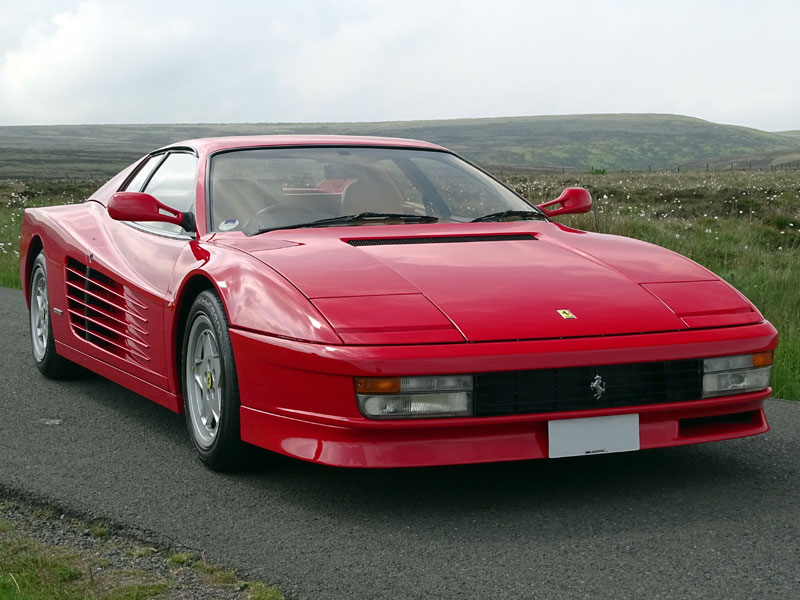 - Re-painted this year with engine out service in 2013

- Offered with 20 old MOT certificates and collection of invoices

Ferrari's mid-engined, flat-12 Testarossa was unveiled to an expectant media at the Champs-Elysée's Lido nightclub on the eve of the 1984 Paris Salon. Though an evolution of the 512BBi, it had a markedly different appearance. In order not to recreate the high cabin temperatures of its predecessor, the Testarossa featured a pair of rear-mounted radiators rather than the 512BBi's single front-mounted one. This called for large, slatted intake ducts leading from the doors and rear quarter panels, and it was these that gave the newcomer both its distinctive looks and considerable girth - at 77.8 inches, it was nearly 6 in wider than the 512BBi. The model was also longer and higher, resulting in more passenger and luggage accommodation.

The Testarossa name (Italian for 'red head') was an echo of Ferrari's immortal Testa Rossa sports racing cars of the 1950s and the engine's cam covers were painted red, as before. The five-litre Colombo-designed unit was very similar to that of the 512BBi, but featured four-valves per cylinder. Together with other improvements, this resulted in a healthy output of 390bhp - sufficient to power the sleek new Prancing Horse to
60mph in just over five seconds and on to a top speed of some 180mph. The Testarossa reigned for seven years, before metamorphosing into the 512TR and finally the 512M.

For obvious reasons, examples of the 438 UK market right-hand drive Testarossas increasingly rarely come to market these days. This one, finished in the classic combination of Rosso Red bodywork and Tan hide interior, is a 1990 model that, to this day, has just 38,315 miles to its name. It was supplied new in March of that year by Nigel Mansell Sports Cars Ltd (Blandford) and is quite simply one of the nicest we have encountered, and has clearly been maintained to the highest standards throughout its life. It has remained within the same ownership for the last 18 years and the invoice from that purchase is among the many documents comprising the car's comprehensive history file.

The vendor informs us that all the fuel pipes were replaced in 2001, while in 2013 the Prancing Horse was treated to an engine-out service by Key Motorsport of Silverstone, that included the replacement of all perishable items such as hoses etc and a timing belt change, and cost £4,223.53 - photos of this work are also on file. Later that year, the same company was commissioned to replace the clutch and service the air conditioning - the bill that time totalled £2,913.64. Last year Keys undertook an annual service on the car, plus the replacement of two tyres and the fuse board - the owner's expenditure on that occasion was £2,213. As recently as this year, the Ferrari has been resprayed in its original colour of Rosso Corsa; another task that was recorded on camera as part of the car's enviable history.

The Ferrari's comprehensive specification includes a Tracker 24 (for which a new owner will need to renew the subscription); a body-coloured front valance which has been in situ from new; and a Sony stereo system with 10-disc autochanger.

This notably desirable Testarossa is now being offered complete with: the original owner's wallet containing handbooks and service book; original sales brochure; DVLA history check confirming all six previous keepers; original tool kit; and a large collection of invoices for work carried out, tax discs and 20 old MOT certificates, plus a current one that's valid into October of this year. The vendor has no hesitation in classing the bodywork, paintwork, mid-mounted flat-12 engine and five-speed manual gearbox as 'excellent' and the leather interior trim as 'very good'. With multi-cylinder engines on the wane, the unique wail of a 180mph Testarossa can surely only become ever more sought-after.