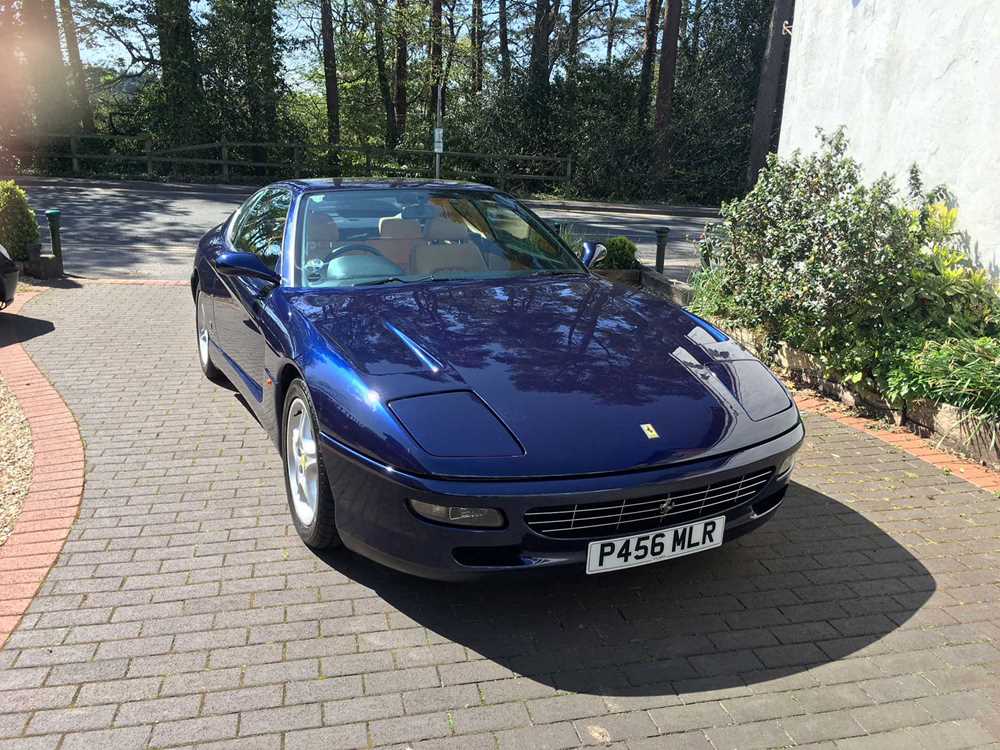 It is finished in Le Mans Blue Metallic (Fer516C) with beige (VM4208) hide and blue (166) carpets. The car was ordered by Maranello Concessionaires for HR Owen and is standard apart from having ' Zone A' trim - Dashboard and Door tops in dark blue leather instead of the usual black. The car is one of the 141 RHD Manual versions originally built, but sadly the number remaining today is closer to 100, and this is believed to be 1 of 8 in this colour combination. The car has twin airbags and 2 sets of keys.

HR Owen sold the car to its first owner, English Entrepreneur Peter de Savary, at the end of September 1996. It is alleged that Mr de Savary's chauffeur did not get on with the heavy clutch of the 6 speed manual on the frequent visits to Mr de Savary's Scottish estate, and after 4 months Mr de Savary part exchanged it against a new Automatic 456. The car was then bought by English Businessman David Williamson who owned the car for just over 11 years. The car passed through 2 'short term' owners, until purchased by its current custodian some 10 years ago.

The car still has its original running gear, and has a full and complete Service History, all stamped in the Ferrari Service book from main dealers and latterly the Surrey Ferrari Specialist Autofficina. These Services are backed up by a complete set of invoices totalling just shy of £90,000. The only piece of missing paperwork is the original purchase invoice from HR Owen to Mr de Savary's company. Mileage is a genuine 100,000 miles - they were built for mile munching across Europe.

Cars are only original once, this 456 wears it's miles with grace. The only damage received to the bodywork during its 24 years were a split in the rear bumper (2nd owner and a car park post) - you can see the rivets where the paint has sunk. 2 of the alloys are slightly chipped, more from careless tyre fitters than careless driving.

The interior is a lovely cosseting place to be, a small amount of leather shrinkage is noted over the instrument binnacle.

For the last 10 years the car has resided in a dehumidified insulated garage and has only been driven during summer months."