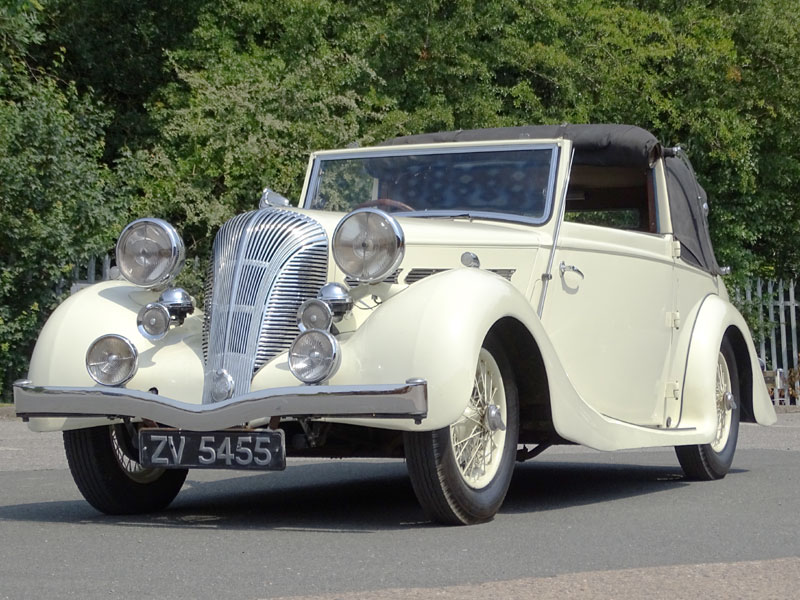 - Dry stored as part of a private collection for many years. Currently running and driving but would benefit from attention to its brakes and general recommissioning

Brainchild of Donald Healey (then serving as the Coventry firm's technical director), the Triumph Dolomite range current between 1936 and 1940 encompassed 1.5 Litre, 14/60 and 2 Litre engines plus a choice of open and closed coachwork. Though, each derivative sported the same flamboyant, Walter Belgrove-penned 'waterfall' grille. A credible SS, MG and Riley rival, the 14/60 was powered by a 1776cc OHV four-cylinder engine allied to four-speed synchromesh transmission. Awarded second-in-class at the 1938 RAC Rally and Coachwork Competition at Blackpool, the 14/60 Drophead Foursome Coupe was a notably elegant design. Bodied by Salmons & Sons of Newport Pagnell, its neatly engineered roof could be set in fully open, fully closed or Coupe de Ville positions. Forming part of a County Wexford based collection for the past twenty-one years, this particular example is one of just three surviving 14/60 Drophead Foursome Coupes known to the Pre-1940 Triumph Motor Club. An accompanying continuation buff logbook shows that the Dolomite was first road registered as 'GR 6798' on 5th June 1939 and belonged to Bernard Newsome, Archibald Newsome and John Wilkie from the 1950s - 1970s. Issued with a MOT Certificate by Adams & Gibbon Ltd of Sunderland on August 2nd 1973 at an indicated 74,686 miles, the past forty-four years have only added another 1,000 miles or so to its unwarranted odometer reading! Formerly Grey, the Triumph was repainted Old English White prior to entering the current ownership. The Black hood has faded somewhat but the Dark Blue leather upholstery remains in good order. Seemingly last driven any real distance in Eire during 2010, the 14/60 Drophead Foursome Coupe started readily upon inspection but would benefit from attention to its hydraulic brakes amongst other recommissioning works. An undeniably handsome Post Vintage Thoroughbred that pleasingly retains its original engine, this very rare Dolomite is offered for sale with a copy sales brochure, old MOTs and sundry other paperwork.