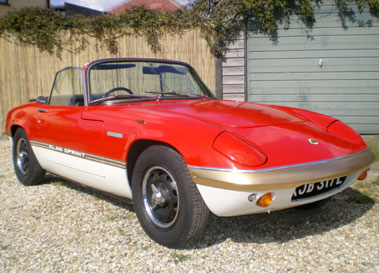 "The Elan remains the definitive small-bore sportscar, the standard by which all others have come to be measured" (Car & Driver magazine, December 1989)
Brainchild of Lotus design and development engineer Ron Hickman, the Elan was introduced at the 1962 Earls Court Motor Show. Based around a steel backbone chassis (a.k.a. the 'Chapman Bracket') clad with lightweight fibreglass bodywork, it boasted such niceties as all-round independent suspension, four-wheel disc brakes, pop-up headlights and integral bumpers. Powered by a 1600cc (initially 1500cc) 'twin-cam' four-cylinder engine mated to four-speed (later five-speed) manual transmission, the diminutive Lotus redefined its class in terms of ride, handling and performance. Arguably the ultimate Elan derivative, the Sprint arrived in February 1971. Characterised by its 'Big Valve' (126bhp / 113lbft) engine and bold colour schemes, the model was reputedly capable of 0-60mph in 6.7 seconds and 121mph. Only in production until August 1973, the Sprint remains keenly sought after by collectors and enthusiasts alike.

Finished in 'Gold Leaf' colours with black vinyl upholstery, this particular example is variously described by the vendor as being in "good" (electrical equipment, paintwork, wheels / tyres) or "very good" (engine, gearbox, interior trim, chassis, bodywork) condition. The subject of a Motor Sport magazine road test in 1989, 'KJB 317L' was also used to ferry Johnny Herbert on a parade lap around Silverstone during the 1993 British Grand Prix meeting. Recently recommissioned after a prolonged period of dry storage (1994-2007), it sports a black hood, wooden dashboard and period Philips Turnolock radio. Riding on Dunlop SP6 tyres, this nicely presented Sprint is offered for sale with extensive service history and MOT certificate valid until August 2008.

PLEASE NOTE: A photograph of Johnny Herbert in the car, as mentioned in the catalogue description, will be available to view in the cars history file.
Share: