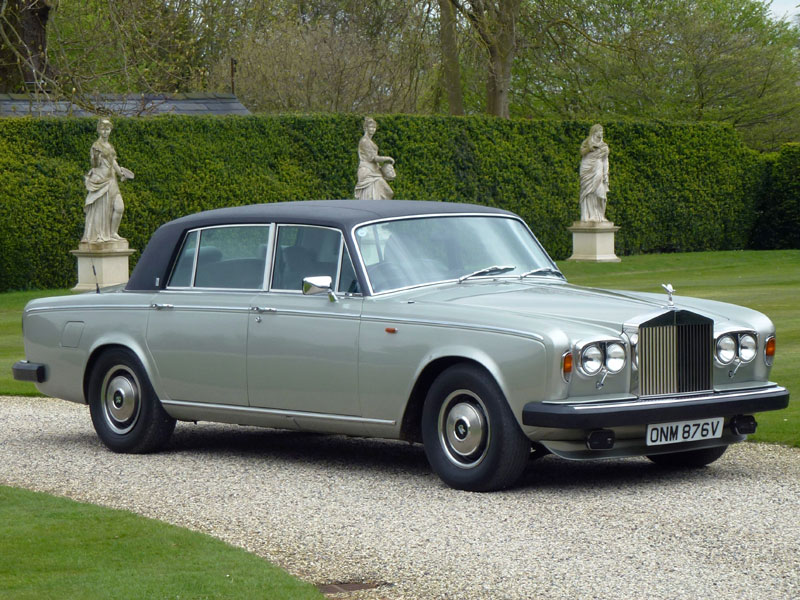 - Finished in a most agreeable colour combination of Pewter paint and grey leather, and described by the vendor as having "excellent" paintwork

This rare Rolls-Royce is the long wheel base Silver Wraith II version and is equipped as most were with the reduced rear window and Everflex covered roof. As well as the smaller rear window to aid privacy, rear seat passengers are afforded with around four inches of extra leg room compared to a Silver Shadow, and this example has picnic / writing tables to the rear of the front seats and movable foot rests amongst the deep-pile over-carpets. Within the original book pack are two service books (the original and a continuation book), the hand book and its supplements. The history file has been described as "extensive" and features many invoices from authorised dealers and specialists such as Ross Brothers, Mann Egerton, HR Owen, The Chelsea Workshop, and Eaton Square Garage, as well as a comprehensive selection of previous MOT certificates from 1993 onwards. The original service book states this motorcar was sold new by Ross Brothers of Ilkley, West Yorkshire, in April 1980 and registered as MWW 434V. Three months later the first service was carried out and it is reported in the service book that the odometer was changed when it displayed 3,371 miles. Therefore, this figure needs to be added onto the odometer reading, which is currently just 77,500 miles. Later registration numbers include AR 1000 and the ONM 876V that the car has now. Letters and invoices in the history file show that a gentleman in Chelsea, London, purchased the car in October 1990 from Mann Egerton, the authorised Rolls-Royce dealership in Dover Street, London. A maintenance invoice from HR Owen in June 1991 indicates the odometer reading as 66,333, and the car was used sparingly during the gentleman's thirteen years of ownership as he had only covered just over 8,000 miles when he sold it in June 2003. The next owner, a gentleman in Boston, Lincolnshire, travelled just 2,700 miles during his first four of ownership, however he then hardly used the car and according to the MOT certificates (which he had issued promptly every June) he covered just 90 miles between June 2007 and October 2013, at which time the car was acquired by our vendor. The car has continued its leisurely existence with our vendor as only around 60 miles have been driven. Due to this inactivity, the car was recommissioned at the end of 2016 and more than £4,000 was spent overhauling and replacing many of the braking components. The Rolls-Royce has apparently been garaged during at least the past two ownerships (and possibly for much of its life given London's parking problems) which would explain why the paintwork, which is a most agreeable metallic pewter grey, is described by the vendor as being in "excellent" condition. With wonderful natural patterns being exhibited in the lovely dark walnut dash board, the grey leather interior is described by the vendor as being in "very good" condition, as one would expect with such a low recorded mileage. This certainly appears to be a superlative example.