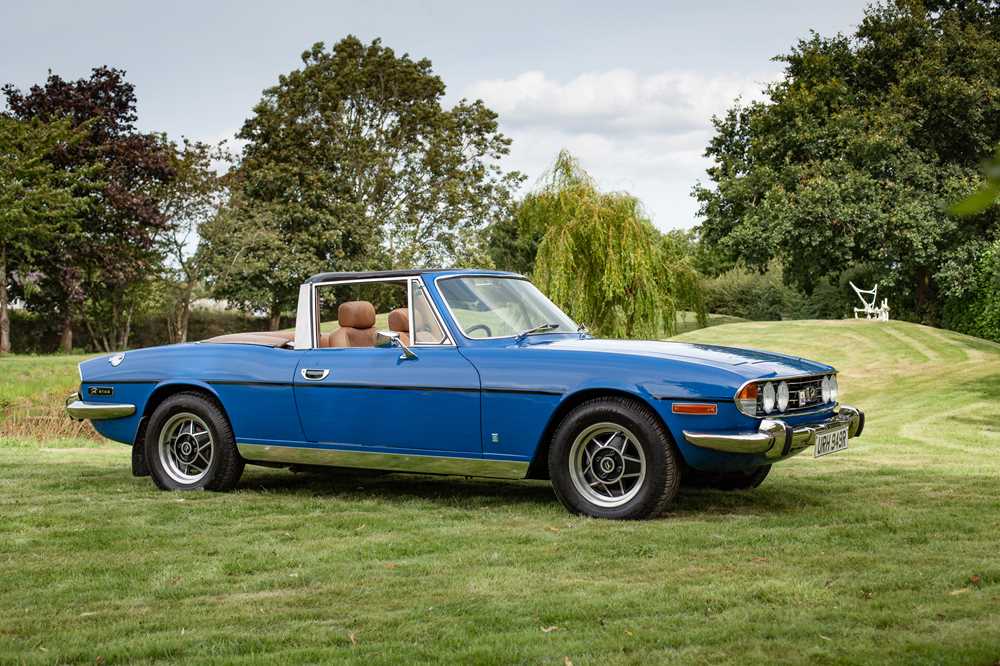 "The great feature of most V8 engines is the inherent flexibility, and the Triumph engine is no exception, pulling from less than 20mph in overdrive top with no shudder or transmission grab... It is... an attempt to enter the highly competitive luxury grand touring class of motoring. We hope it succeeds." - MotorSport, July 1970.

Stylish, fast, and practical, the Stag began life as a Triumph 2000-based styling exercise by Italian carrossier Giovanni Michelotti. A 2+2 convertible, Michelotti's design featured a quad-lamp grille and sculpted front and rear ends, the latter destined to appear on many future Triumphs. By the time production commenced in 1970, the 2000's six-cylinder engine had been replaced by a 3-liter V8 based on an overhead-camshaft four - later to power the Dolomite range - already being produced by Triumph for SAAB. A padded, 'T'-shaped roll bar bracing the door pillars and windscreen was one of the Stag's most distinctive features, and the model could be had in soft-top, hardtop, or soft-with-hardtop forms. MotorSport described the Stag's interior as, 'well-appointed, having all the usual instrumentation one would expect in a high-performance car.'

Supplied new in February 1977 to Mardon Trailers Ltd (by agents Armstrong-Massey), the Triumph Stag here on offer was specified in Tahiti Blue and complemented by beige interior trim. Upgraded to manual transmission early in its life, the Stag was used extremely sparingly by its five former custodians, covering only 27000 miles over the following four decades. Appearing to have been off the road for a period in the 1980s, the car was re-registered when records were digitized, with the VRM changing from 'SKH 533R' to 'URH 949R'. Passing into the hands of our vendor's late husband in August 2018 (via marque specialist Warren Kasraie), the Stag was treated to routine maintenance whilst in his care and a rebuild of the transmission at a cost exceeding £1500.00. Benefiting from a Kenlowe fan, the factory-fitted V8 engine started readily during our recent photography session and remained untemperamental with no signs of overheating. Offered for sale with an enviable history file comprising the car's original purchase receipt, stamped factory 'Passport to Service' book, and various MOT certificates dating back to 1990.

A delightfully handsome sports car of the period; this unrepeatable low mileage example is a fine way to enjoy those few remaining balmy summer evenings and should prove to be a worthwhile investment for the successful purchaser.