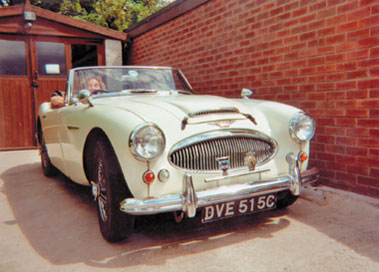 The current Lancashire owner of DVE 515C believes that his Austin-Healey 3000 Mk 2 has had only three owners since 1965. The patina today is good, he says, with Old English White paintwork and blue interior both in good condition. The car comes with chrome wire wheels and, in addition to the 4-speed manual gearbox, the desirable overdrive option. The 65,307 miles displayed on the odometer when entered for this sale is believed to be the correct total mileage covered from new.
Apart from an old style original green logbook, also within the history file is an original Michelin brochure for XAS tyres, dating from January 1967, confirming from the photo of car and registration depicted that this was the actual 3000 employed by the Stoke on Trent manufacturers to promote their tyres in a press advertising campaign which ran between March and July 1967.
Indeed, according to a letter and copies of cuttings from Michelin - one of which relates to advance news of the upcoming XAS campaign in the Feb/March 1967 edition of Michelin house magazine, Tyre Traders News - the car featured in their tyre ads in virtually all the major publications of the day, among them the Observer magazine as well as the Express, FT, Mail, Mirror, Times, Record and the long since departed Daily Sketch.
As the vendor says, this is a very genuine 3000 and, having been a model for Michelin, a historic one too.
Share: