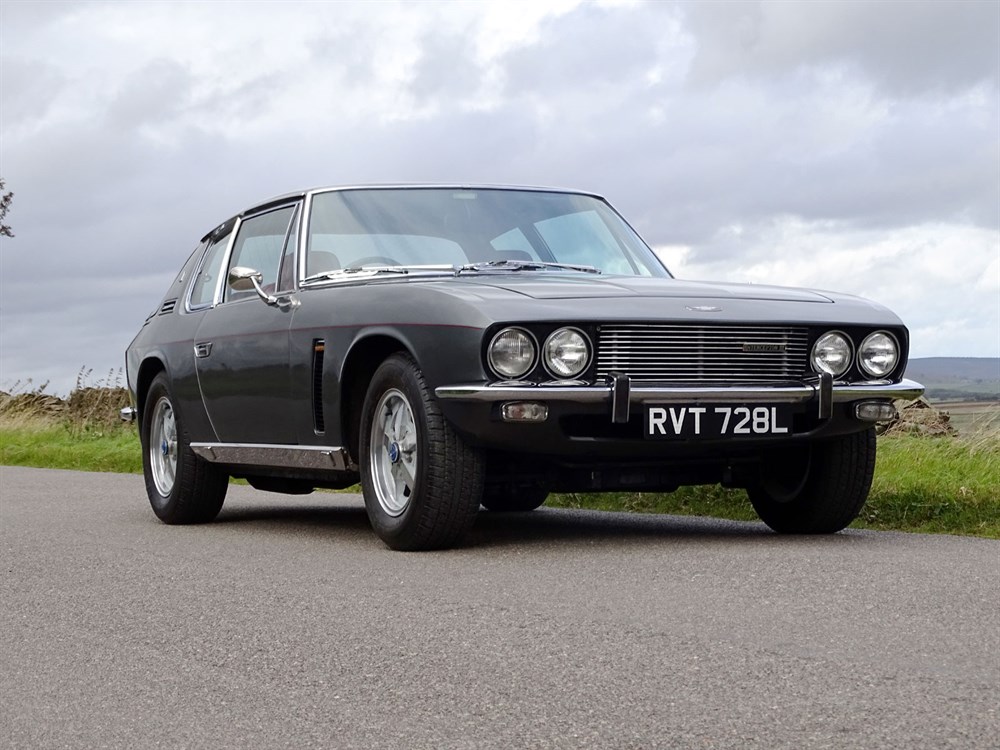 Introduced at the October 1971 Earls Court Motor Show, the Jensen Interceptor III shared the same striking Vignale-penned sheetmetal and advanced tubular-chassis frame as its predecessors, but was readily distinguishable by its cast headlight surrounds, GKN alloy wheels and comprehensively revamped interior. Initially powered by a Chrysler 6.3-litre V8 engine, the model was soon upgraded with an even larger 7.2-litre unit. Boasting Torque-Flite three-speed automatic transmission and four-wheel disc brakes as standard, the 2+2-seater Coupe was both impressively refined and seriously quick. Indeed, the 7.2-litre versions were reputedly capable of 0-60mph in 6.4 seconds and 140mph. The model was bought by celebrities as diverse as Led Zeppelin drummer John Bonham, golfer Peter Butler, British Foreign Secretary Lord Carrington and World Motorcycle Champion Phil Read. Of the 2,477 Interceptor IIIs made, just 703 were 128-series cars.

Beautifully finished in Gunmetal metallic with original Cherry Red leather upholstery, chassis number 128-4785 is warranted to have covered just 52,000 miles from new. Accruing an average of 8,000 miles per annum up until 1977, the Jensen was then used more sparingly and indeed has only added 500 miles to its odometer in the last nine years. Belonging to its last registered keeper from 1992-2009, `RVT 728L' appeared on the BBC television programme `Top Gear' two years into his tenure. Fitted with a new Holley four-barrel carburettor, high-torque starter motor and stainless steel exhaust prior to entering the current ownership, the Jensen has since been thoroughly checked over and treated to a comprehensive automatic gearbox overhaul by Mr Gearbox of Sheffield. Starting readily upon inspection and pulling strongly during a recent outing with all gauges registering correctly, the Interceptor pleasingly retains its original `Jensen Car Company Ltd' tax disc holder, `Jensen Cars Ltd' rear window sticker and even a period fire extinguisher! Enormous value when compared to period rivals such as the Aston Martin V8 and Iso Grifo, this much loved, low mileage Interceptor is worthy of close inspection and expected to possess a fresh MOT certificate by the time of sale.

PLEASE NOTE: This lot was driven some 160 miles to the sale apparently averaging over 20mpg in the process. The vendor has not had the Jensen MOT tested because a pre-inspection revealed a minor power steering leak and he has not had time to source a suitable replacement part.
Share: