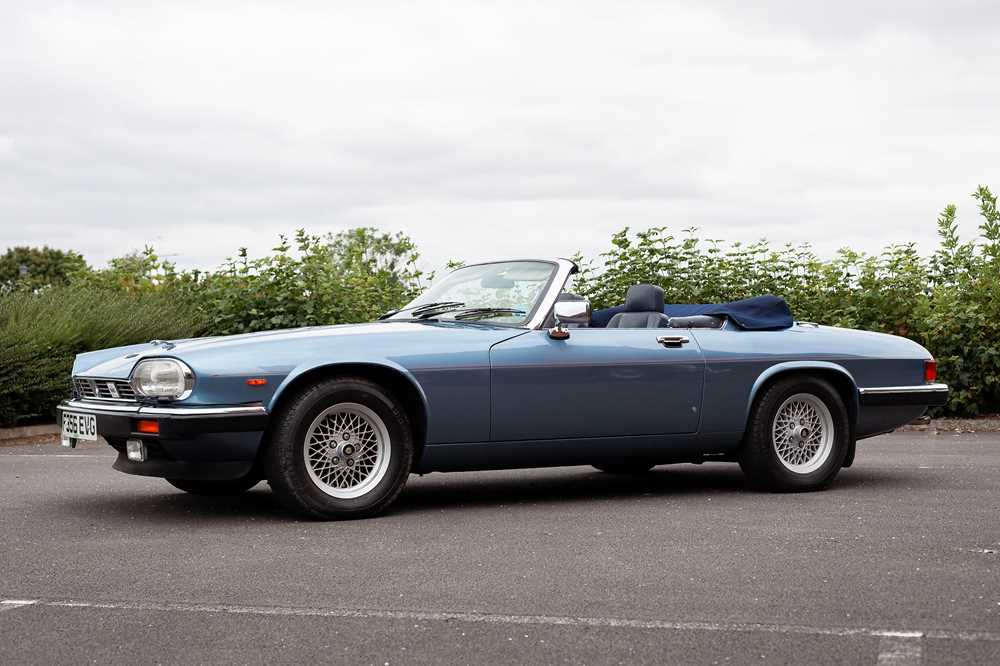 Launched in 1975, Jaguar's XJ-S was designed to seamlessly blur borders rather than blast down back roads and was equipped with automatic transmission as standard. Though, when fed the quoted 295bhp and 318lbft of torque developed by a post 1981 H.E. (high efficiency) 5.3 litre V12 engine, this still resulted in a claimed top speed of 150mph and 0-60mph in less than eight seconds. Introduced at the 1988 Geneva Motor Show, the long awaited full convertible version featured a reinforced floorpan, frameless doors and sophisticated electric hood (complete with heated glass rear window). Underpinned by the same all-round independent coil-sprung suspension and power assisted rack and pinion steering as its fixed head coupe siblings, the soft-top came with anti-lock brakes as standard. Priced at some £40,000, a waiting list was quick to form.

Finished in the handsome combination of Arctic Blue Metallic with Dark Blue leather upholstery, chassis 156679 was supplied new by Stratstone of Mayfair to the Battersea-based Edwards Furniture Galleries. Fifteen stamps in the accompanying service book (mostly main dealer) help warrant the current odometer reading of 67,000 miles. Migrating from London to Norfolk during 1995, the Convertible was retailed by Mann Egerton (Jaguar) of Norwich two years later complete with a warranty; their number plates and rear window sticker still adorn the car. Kept garaged on a Norfolk estate with occasional exercise around the grounds between 2010 and 2020 while its previous (fourth) owner’s health sadly deteriorated, the XJ-S has since been recommissioned. Expensively treated to a new mohair hood in the recent past, the two-seater remains highly presentable. Starting readily and running well during our recent photography session, ‘F356 EVG’ is described by the vendor as being in ‘very good / excellent overall’ condition with regards to its V12 engine, automatic transmission, electrical equipment, bodywork, paintwork and interior trim. He adds that the Convertible is ‘an excellent driver’. Offered for sale with V5C Registration Document, book pack, sundry paperwork and fresh MOT certificate.