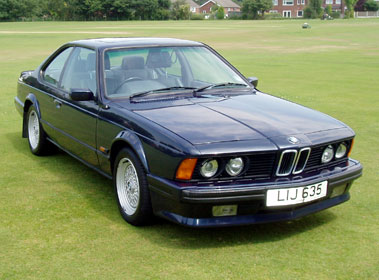 Successor to the race proven (E9) 3.0CS/CSi high performance sports coupes, the 6-series was introduced in August 1976. More forgiving than its predecessors, it utilised a modified version of the (E12) 5-series saloon platform equipped with all-round independent suspension (coil and wishbone front, trailing-arm rear) and powerful disc brakes. A natural rival to the 928 and XJS, the four-seater 6-series proved more capacious than the Porsche and sportier than the Jaguar. Immediately recognisable thanks to its distinctive 'shark nose' frontal styling and thin pillared glasshouse it boasts real road presence. An impression backed up by the various versions of BMW's mighty M30, SOHC straight-six engine fitted throughout the range. Second only to the BMW Motorsport tuned M6 version, the 635CSi's 3430cc unit developed some 216bhp and 232lbft of torque (outputs that were reputedly sufficient to propel it from 0-60mph in 8.4 seconds and on to 135mph).

Finished in dark blue with grey hide upholstery, this particular example is described by the vendor as being in "good" condition with regard to its engine, electrical equipment, bodywork and paintwork. Though, he notes that there is "a small dent to the driver's door" and "some creases to the front seats". Reportedly entering the current ownership some six and a half years ago, the BMW is since understood to have proven "a great motor car". Riding on cross-spoke alloy wheels and sporting a discrete boot lip spoiler, the coupe was apparently treated to a reconditioned automatic gearbox several months ago. Showing an unwarranted 88,000 miles to its odometer and wearing the highly appropriate number plate 'LIJ 635', this handsome 635 CSi is offered for sale with MOT certificate valid until April 2010 and current road tax.
Share: