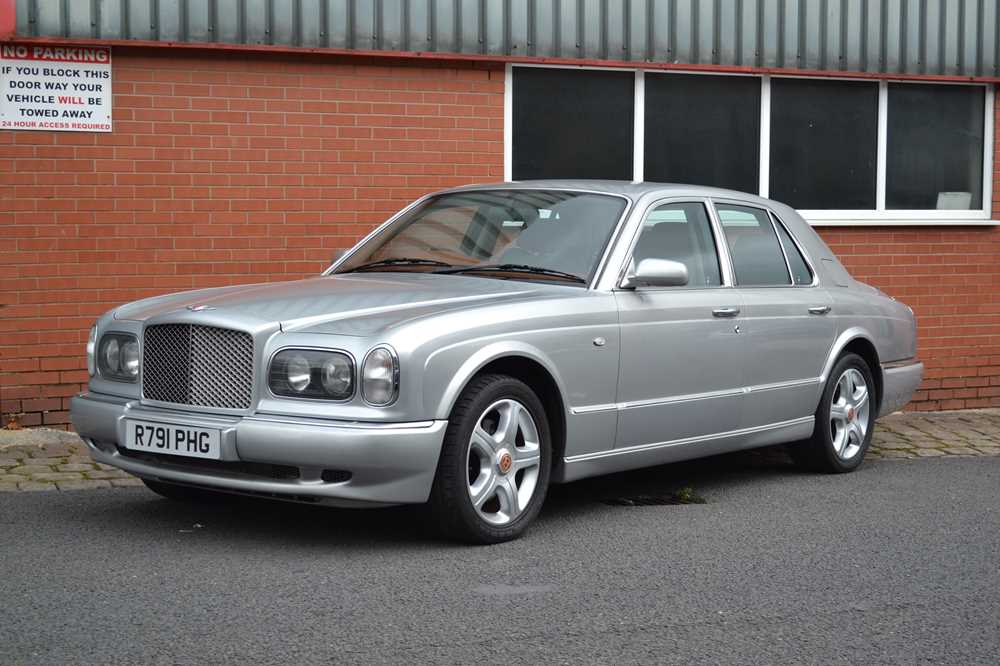 Like its predecessor the Mulsanne, the Arnage was named after a section of the famous La Sarthe circuit at which Bentley had scored five Le Mans 24-hours victories during the 1920s. Based around a monocoque bodyshell equipped with all round independent suspension, four-wheel disc brakes and power-assisted steering, the newcomer was powered by a BMW-derived twin-turbocharged 4.4 litre V8 engine allied to five-speed automatic transmission. With some 350bhp and 420lbft of torque on tap, the luxury saloon was reputedly capable of 0-60mph in 6.5 seconds and 149mph. As befitted a Crewe built car, its interior was beautifully trimmed with the best quality leather and wood veneers. Reworked to accept Bentley’s venerable 6.75 litre V8 following Volkswagen’s takeover of Bentley in 1999, the number of BMW-powered Arnages was rather small with a mere 439 first series RHD examples being made.

This first-series Arnage was manufactured in 1998 and was first registered in the UK on the 6th of June 1998 being supplied new by Ron Stratton and Co. Rolls-Royce and Bentley of Knutsford, Cheshire. Fitted with the 4398cc BMW turbocharged V8 engine mated to the five-speed automatic transmission, the Arnage is finished in Silver Pearl with a special order interior that encompasses a blend of Portland hide and English Tan leather sections throughout with medium tone woodwork. ‘R791 PHG’ has a total mileage of 144,776 miles from new (at time of consignment) although is showing approximately 71,000 miles following a documented speedometer change in 2004. First owned by Fredrick Dairies of Stockport and registered as ‘1 CES’, the Arnage is understood to have been chauffeur-driven during their ownership, where it was retained until 2010. With only three former keepers from new, the Arnage has been in its current custodianship since 2016.

The Bentley benefitted from £2,646 worth of expenditure in 2016 with Shadow Vehicle Services including two new rear gas suspension spheres, electrical work and gear selector mechanism rectification. Well specified from new, ‘R791 PHG’ is accompanied by the full specification sheet along with the original book pack (including the stamped service book displaying fourteen stamps from main dealers and one further classic and specialist stamp) and a large selection of past invoices and MOT certificates. The Arnage is offered with a current V5C and MOT until August 2022.