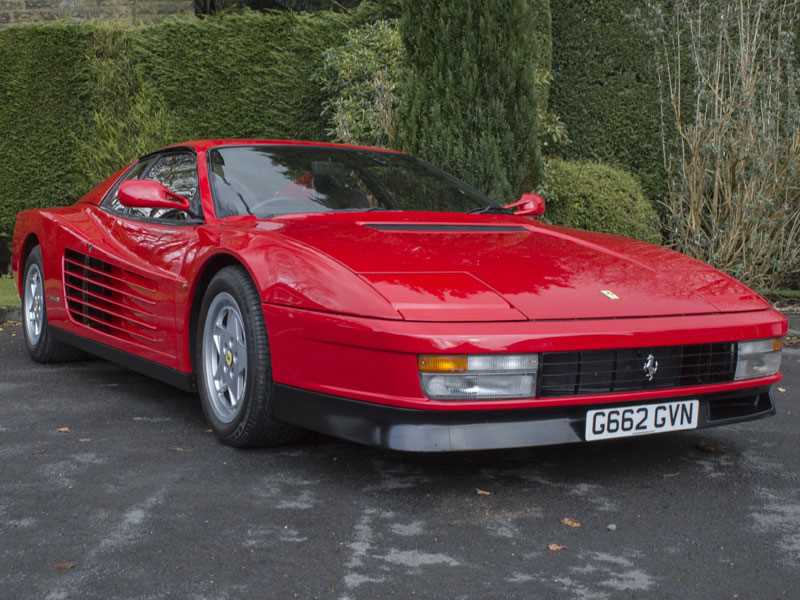 Ferrari's mid-engined, flat-12 Testarossa was unveiled to an expectant media on the eve of the 1984 Paris Salon. Though an evolution of the 512BBi, it had a markedly different appearance. To avoid the high cabin temperatures of its predecessor, it featured a pair of rear-mounted radiators rather than a single front-mounted one. This called for large, slatted intake ducts leading from the doors and rear quarter panels, giving the newcomer both its distinctive looks and considerable girth.

The Testarossa name (Italian for 'red head') echoed Ferrari's immortal Testa Rossa sports racing cars of the 1950s and the cam covers were painted red, as before. The five-litre Colombo-designed unit was very similar to that of the 512BBi but featured four-valves per cylinder. Together with other improvements, it produced a healthy 390bhp - sufficient to power the sleek new Prancing Horse to 60mph in just over five seconds and on to a top speed of some 180mph. The Testarossa reigned for seven years, before metamorphosing into the 512TR and finally the 512M.

For obvious reasons, examples of the 438 UK market right-hand drive cars come to market increasingly rarely these days. This one, finished in the classic combination of Rosso Red bodywork and Black hide interior, is a 1990 model that, to this day, has covered just c.22,700 miles. 'G662GVN' was subject to its annual service and cambelt change in 2014 by Ferrari specialist Kent High Performance Cars. More recently in 2019 the Ferrari has benefitted from a comprehensive service including belts at Alexanders Prestige Cars. Featured in Classic and Sportscar's 70th anniversary Ferrari magazine. Offered with leather wallet, handbooks, service book, large collection of invoices, old MOT's, original parts catalogue, tool kit and fitted car cover, the vendor currently rates the engine, gearbox, interior, paintwork and bodywork as 'Excellent '.