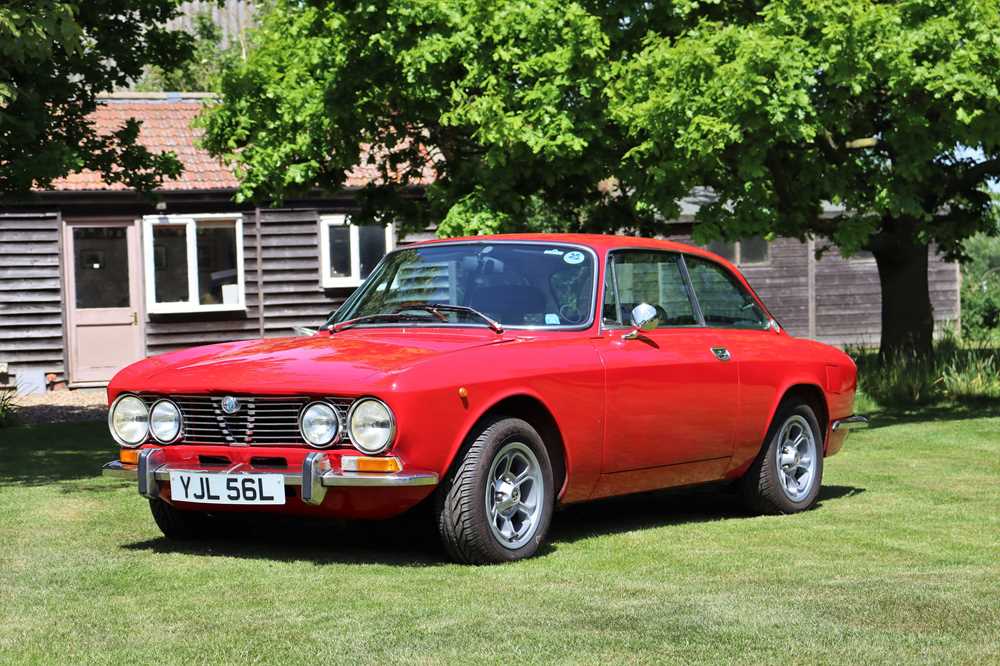 Arguably one of the best-looking Alfa Romeos ever made and a true motoring icon, the Giulia Sprint GT was launched in 1963. Penned by Bertone, it was equipped with all round coil-sprung suspension and well-weighted steering. The model range was extended in 1971 to include the revised 2000 GTV. Fitted with an enlarged 1962cc 'twin-cam' engine developing some 131bhp, it inherited the longer wheelbase platform and all-wheel disc brakes of its older 1750 GTV sibling.

Manufactured in 1972, this 2000 GTV is a desirable UK-supplied, right-hand-drive example, being UK registered on the 5th of October that year. Fitted with the 1962cc 'twin-cam' straight-four engine allied to the five-speed manual transmission, the Alfa Romeo is finished in the iconic colour combination of Red paintwork with Black interior upholstery. The GTV was discovered by the restorer, Adam Andrews, outside a house (under a sheet) following approximately a year off the road, and was subsequently purchased by him for returning to the road.

Following an extensive restoration by Mr. Andrews to concours standards during the 1990s, ‘YJL 56L’ was featured in Classic Cars magazine's March 2000 issue (copies included). With a recorded mileage of around 49,000 miles when restored (which was believed genuine), the odometer was subsequently zeroed and some 12,124 miles have been covered since the completion (at time of consignment). The detailed restoration works included a full repaint; brake overhaul; engine tuning (with an upgraded cam and 45mm Dellorto carburettors to produce some 170bhp); new brightwork; and re-trimming of the interior with black leather, whilst the car rides on rare Momo alloy wheels. Following its purchase by the previous owner in around 2000, a further £6,000 was spent with Benalfa on mechanicals including an exchanged cylinder head and block.

Obtained by the vendor in 2016, the 2000 has subsequently been subject to much additional improvement with invoices from Alfa Workshop and Classic Alfa, and has been serviced regularly. Accompanied to sale by a large history file that contains an instruction book, Service Coupon book and dealer list, the previously mentioned copies of Classic Cars magazine, numerous invoices, a collection of MOT certificates dating back to 1994, sundry paperwork and a current V5C document.