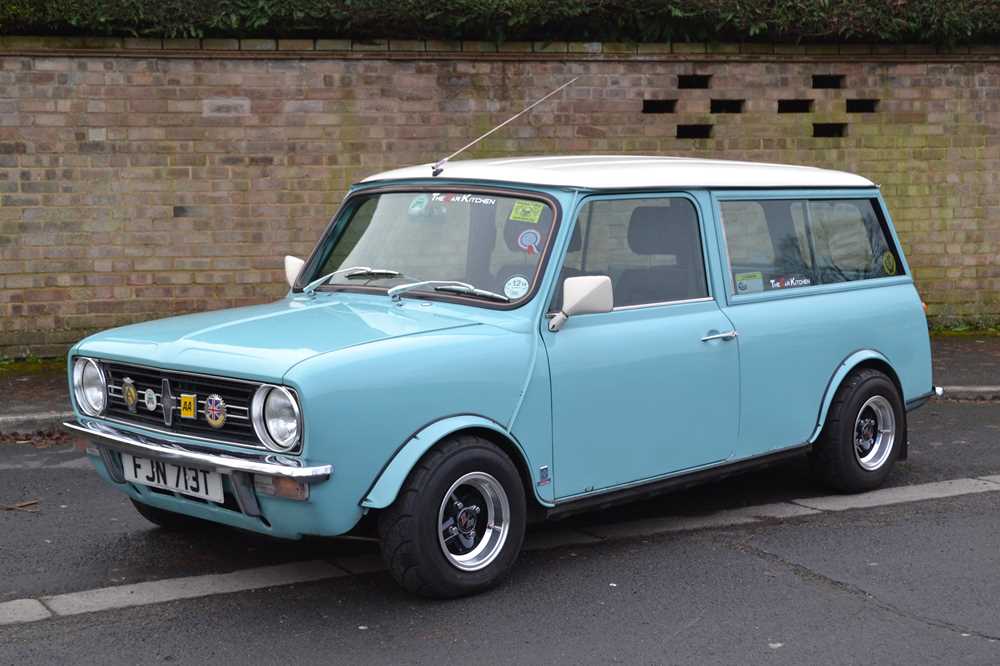 Introduced in October 1969, the Mini Clubman was penned by ex-Ford product planner and stylist Roy Haynes. Intended as a replacement for the Mini-derived Wolseley Hornet and Riley Elf, the newcomer boasted better frontal crash protection and improved under-bonnet access. Available until 1982, the Clubman Estate (like its Countryman forebear) blended the Mini's legendary handling and verve with a welcome dose of practicality. Sitting on a longer 7-ft 0-in wheelbase, it featured all-round independent suspension, four-wheel drum brakes, and rack and pinion steering. Powered by a 998cc or 1098cc four-cylinder A-series engine, the estate was only fractionally slower / less economical than its saloon sibling. Similarly available with the option of manual or automatic transmission (though only the 998cc guise saw the automatic box option), the load-lugger wore wood-effect fillets down either flank until 1976.

‘FJN 713T’ was manufacture relatively late in the Clubman’s production run, in 1979, and first UK registered in April 1979. Understood to have only had a total of four owners, the Austin Morris is finished in Pastel Turkis with an Old English White roof. This example was originally manufactured with a 998cc engine mated to the automatic gearbox, however, in circa 2005/6 both engine and gearbox were changed to a manual gearbox and 998cc from a later Mini, both of which are correctly declared on the V5C. Restored in approximately 2011 with photographs of the restoration included in the history file, there is also an extensive collection of past invoices, numerous past MOT’s, the original ‘Passport to Service’ booklet, Owners Handbook, and Wallet. The odometer indicates 50,850 miles which is thought to be genuine for the bodyshell.

During the vendor's custodianship, the Estate has received numerous performance and cosmetic upgrades amounting to over £5,200 worth of expenditure. The engine has been uprated with a Stage One kit, Fletcher radiator, electric distributor, and Metro Turbo custom rocker cover, while the suspension has received a full overhaul with new Spax adjustable shock absorbers, Hi-Lo kit, negative camber arms and new track rod ends. The brakes have received renewal and improvement, benefitting from vented and grooved discs and four-pot calipers on the front, with MiniFins brake drums on the rear. The single-box RC40 exhaust and five Revolution 6x10 alloys shod with Yokahmo tyres complete the external changes, while the inside was provided with a Black and Grey Cobra interior and MiniSport dashboard, centre console, and gauges.