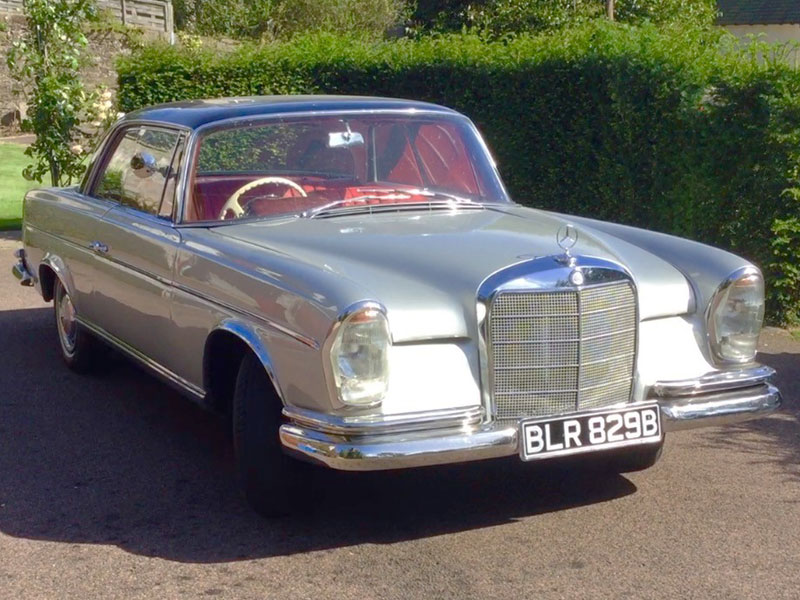 This lovely big Benz has had just four keepers from new, the first of whom retained it for 32 years. Fitted with the rarer four-speed manual floor change gearbox and sunroof, the vendor acquired it in 2015 and believes it had been kept rain-free since being restored and resprayed five years earlier. The Coupe is understood to have started life in Glasgow before spending an extended period in the Channel Islands. Earlier this year the vendor commissioned Classic Restorations of Alyth to carry out any remedial work they felt was required, the bill for which totalled £4,250. Finished in Black over Silver and trimmed in a very attractive shade of Red leather, 'BLR 829B' is now ready to be enjoyed by a new keeper and is being offered complete with: receipts dating back to 2000 and for the 2010 restoration that included work to the brakes, suspension and exhaust system, powder coated wheels, new tyres and radiator and fresh upholstery, headlining carpet and dash; plus a number of old MOTs and one valid to November 16 next year. Judging by the paperwork, the recorded mileage of 73,000 is almost certainly genuine. A fine example of period Mercedes-Benz engineering.

Via the W111 'fintail' series of 1959, Mercedes continued its practice of offering special two-door Coupe or Roadster versions of its Saloon cars, and the 220SEB took this supreme elegance to a whole new level. Based on the flagship S-class W111 'fintail' Saloon, with its signature upright headlights and imposing traditional Mercedes-Benz grille, the Coupe comprised a light and airy pillarless glasshouse over a distinctive two-door body. The 220 Coupe was very well appointed inside, featuring Mercedes textured leather and wood trimmings. The model's 2195cc, SOHC engine employed mechanical fuel injection of the same type as the 'Pagoda' SLs - its 120bhp being sufficient to propel the car at up to 106mph. A total of some 14,173 220SEB Coupes were built between 1961 and 1965 when the run was terminated.
Share: