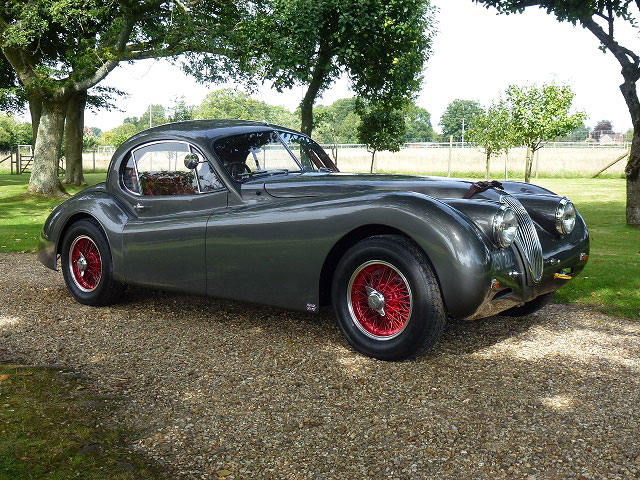 - Beautiful example built to exemplary standards by John May

In addition to maintaining the factory XK 120's for many years and providing the basis for the Nigel Dawes series, John May has been creating his own interpretations of the ideal XK Jaguar for several decades. Today, he is no longer accepting new work. It is not simply that his cars are built to exemplary standards and incorporate the fruits of his vast experience of the marque, it is his uncompromising determination to get the detail of the job absolutely right which makes his output special.

679351 left Brown's Lane in 1952, bound for the US. By the late 1990's it had found its way back to Tewkesbury and underwent a painstaking bare chassis restoration. The detailed specification was formulated with occasional competition in mind, but principally, to serve as a long range tourer. It was finished in 2000. In the early years following the completion of its build, the car took part in the road going class of a few XK races, only failing to finish once (when the driver broke the gearstick and got fed up driving around in second gear). It was always driven to and, importantly, back from the circuits at which it competed, never suffering an impact. Its only 'competitive' outing in the past 10 years came as the result of an invitation to take part in the 'Daily Express' Production Jaguar race at the Silverstone Classic in July 2009, a one off race staged to celebrate the 60th anniversary of the XK's first competition victory at Silverstone in 1949. A commemorative plaque from this event is fitted to the dashboard. Although it has had limited use, the car has been maintained by John.