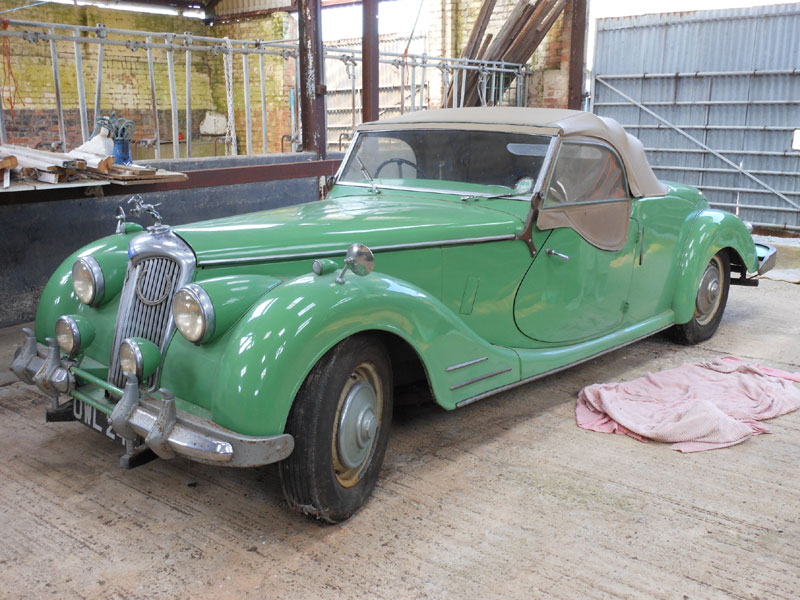 The RM Series cars were the last 'proper' Rileys - the swansong of the marque before it was subsumed into the mighty British Motor Corporation. The model range was manufactured in Coventry until 1949, when production moved to the MG factory at Abingdon. The RMA/RME models were large Saloons powered by 1.5-litre four-cylinder engines, while the 7 inches longer RMB/RMF models featured twin-cam 2.5-litre units. The RMC and RMD were limited edition Roadsters. While the latter was a conventional two-door Drophead Coupe, the RMC was a far more distinctive variant primarily designed for export to North America.

Ostensibly a two-door convertible version of the RMB, it featured a three-abreast front seat, cutaway doors, foldaway hood, large rear stowage area, fold flat windscreen, lower bonnet line and a column mounted gearchange for the four-speed manual transmission. The 2.5-litre four-cylinder powerplant was also unusual in having twin push rod-operated camshafts placed high in the cylinder block. The unit's output was circa 100bhp at 4,500 rpm - sufficient to accelerate the big Riley to 60mph in around 16.5 seconds and on to a genuine 100mph. Only 507 examples of the RMC are understood to have been produced between 1948 and 1951, making it a rare car by any standards.

The right-hand drive 'home market' RMC on offer vacated the factory in October 1949 and was first registered the following year. It sports Almond Green bodywork teamed with Beige leather upholstery. The distinctive three-seater has apparently been dry stored for many years and is therefore now in need of a degree of recommissioning. The vendor considers the chassis and body frame to be "serviceable" but notes that the "brake system is currently seized". Presumably of equine connections, 'OWL 242' comes complete with horse-rider radiator mascot and horseshoe attached to the grille. The odometer displays an unwarranted 38,277 miles. A rare opportunity.
Share this page: