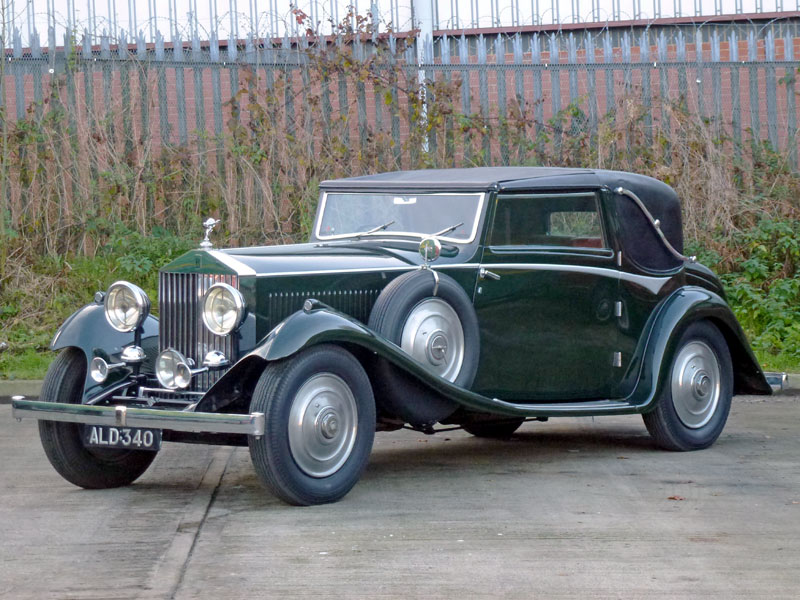 Maintaining its policy of offering one 'Large' and one 'Small' model (the terms being purely relative), Rolls-Royce introduced the 20/25 in 1929 as a successor to the outgoing 20. Though the newcomer was aimed at owner drivers, many examples were sold to customers with chauffeurs. Power came from an enlarged version of the straight-six unit used in the 20. Now of 3,699cc, it made for swifter acceleration and a higher top speed of up to 75mph. The four-speed manual gearbox featured the manufacturer's traditional righthand change and was equipped with synchromesh on the top two ratios from 1932 onwards. The substantial chassis sported rigid axles front and rear suspended on semi-elliptic leaf springs. The four-wheeled braking was mechanically servo assisted. Bodywork for the 20/25, was to the taste of the customer, and Gurney Nutting, Park Ward, Thrupp & Maberly, Mulliner and Hooper were among the many coachbuilders selected to clothe these fine cars. Nearly 4,000 20/25 chassis were produced, making it the company's best-selling model between the wars.

The English coachbuilder J Gurney Nutting & Co Limited was founded in 1918 and its first designs were displayed at the 1920 London Motor Show. The two developments that helped propel the company to early prominence from 1924 were a licence to employ the Weymann technique of body construction and the arrival of Scottish designer AF McNeil, who joined from Cunard. In 1928 the Prince of Wales commissioned a Weymann body on a 41/2-litre Bentley that featured a high waistline and shallow windows for added privacy. The so-called 'Prince of Wales' body style became a best seller, and in 1931 Nuttings was appointed 'Motor Body Builders to His Royal Highness The Prince of Wales', an honour that endured until 1935. By the early '30s Nutting had dropped the Weymann style of fabrication in favour of more rounded, traditionally-built coachwork and so began the company's heyday of Saloon, Coupe de Ville and Sedanca de Ville bodies on Rolls-Royce and Bentley chassis.

The decidedly elegant lines of this lovely Sedanca Coupe is a perfect case in point, which is one of only 22 manufactured to the specifications of London Rolls-Royce dealer Captain H.R. Owen, that are therefore also known as 'Owen Sedancas' - purchasers of these grand models included three sons of King George V and Prince Ali Khan, the husband of film star Rita Hayworth. It is understood that Chassis GSY20 was originally ordered with Thrupp & Maberley coachwork, but the buyer, an A R Tillotson, perhaps swayed by the kudos surrounding the royally patronised Gurney Nutting Sedanca Coupe, switched the build to that design, which came off test on May 4 1933.

Not too much is known about the motorcar's subsequent history. It is believed to have spent time in the United States and was the subject of an older restoration that has stood the test of time well, displaying only a few minor marks and cracks in the paintwork. It is these days finished in the stately combination of Dark Green (Brewster Green or a near match) over Black and trimmed in Tan hide, and was acquired by the vendor in 1991 as an addition to his already sizeable private collection. It featured in the Miller's Guide for 1991/1992 (p.280) and is understood to have been exhibited at the RREC's Castle Ashby club event on several occasions, won a prize at Techno Classica Essen, and participated in this year's Classic Days at Schloss Dyck event.

This eminently practical Coupe, with its wide doors and front seats that fold well forward to aid rear seat entry, has many notable features including: twin wing-mounted spare wheels, above the nearside one of which is mounted a rearview mirror; the comprehensive vanity units mounted either side of the rear seat; Gurney Nutting's trademark beading running from the radiator grille to each rear wheelarch. GSY20 is superbly presented by the vendor who currently considers the Coupe coachwork, paintwork, interior trim, straight-six engine and manual gearbox to all be in 'excellent' order. A rare opportunity.