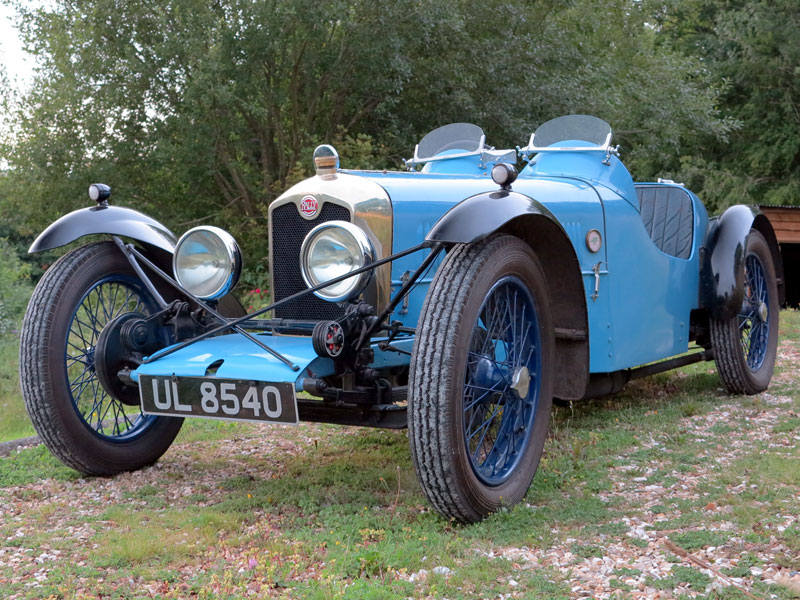 Introduced in 1927, the Rally Type ABC featured an 'abaissee' (or underslung) chassis that endowed it with notably good handling / roadholding. Indeed such was the Paris-built sports car's reputation that MG are known to have acquired one for analysis. Available with a choice of 1.1, 1.2 and 1.5 litre four-cylinder proprietary engines allied to three-speed manual transmission, even the smallest capacity derivative was reputedly capable of over 80mph. A popular choice in 1.1 litre class events, the Rally Type ABC's period competition pedigree encompassed the GP de l'A.C.F., Spa 24 hours, GP Guipuzcoa, Bol d'Or, Mille Miglia and Brooklands Double Twelve.

Sold off thereafter, the Rally Type ABC was re-acquired by J.A. Driskell during early 1933. In between times he had campaigned a BNC and engaged the services of Ralph Silva as an apprentice mechanic (the latter subsequently worked for first ERA and then Prince Bira alongside Stan Holgate). Re-liveried from red to blue, 'UL 8540' participated in numerous sprints and hillclimbs with Driskell / Silva aboard as well as returning to Brooklands for the High Speed Trial and Relay Race etc. Doubtless more agile than the Ford V8 that he piloted on the 1934 Monte Carlo Rally, Driskell is rumoured to have kept the French sports car until his death during late WW2.

An accompanying list of former keepers suggests that 'UL 8540' remained in the Home Counties until the mid-1950s when it migrated northwards. Acquired by Douglas John Moray Stuart, the sometime Lord Doune and 20th Earl of Moray in 1972, the voiturette formed part of his renowned motorcar collection for nigh on thirty years. Restored whilst on display at Doune Castle, it changed hands twice thereafter before entering the current ownership during 2003.

Starting readily upon inspection, 'UL 8540' retains what the vendor believes to be its original but much repaired SCAP X11 1.1-litre engine. Still wearing the same 'Grand Prix'-style, tapered-tail bodywork that it sports in the numerous period photos on file, the two-seater even displays evidence of what is thought to be its initial 'Moulin Rouge' livery (visible to the chassis and axles in places). Sparingly used over the last dozen years, the Rally Type ABC has nonetheless benefited from new internals for its three-speed manual gearbox. Thought to have been fitted with an uprated rear axle during the 1930s (the original unit lacked a differential), the two-seater also sports a period Rene Thomas four-spoke steering wheel.

Described by the vendor as possessing 'fair' paintwork and 'patinated' blue leather upholstery, 'UL 8540' was much admired when invited to form part of Cartier's 'Style et Lux' exhibit at the 2014 Goodwood Festival of Speed. Seemingly highly original and potentially eligible for the Mille Miglia Storica among many other prestigious events, this undeniably handsome (Bugatti Type 37-esque) Rally is offered for sale with V5C Registration Document, history file and its silver medal from the 1929 MCC Land's End Trial.
Share: