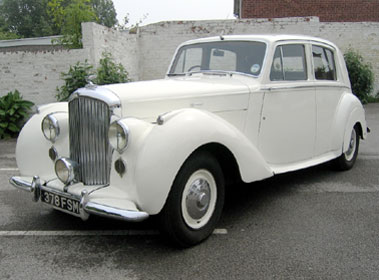 Introduced in 1946, the MKVI was Bentley's first post-war model. Aimed at the emerging 'owner-driver' luxury car market, the newcomer was closely based on the 1939 MKV (of which only fifteen were produced). Built around a massive cruciform-braced chassis with independent front suspension and a leaf-sprung 'live' rear axle, it was fitted with a freshly developed 4257cc OISE (overhead inlet side exhaust valve) straight-six engine mated to a four-speed manual gearbox. Capable of over 100mph when clad in the factory's understated but stylish 'standard steel saloon' coachwork, the MKVI quickly developed a reputation for being a refined yet responsive drive. Though, the availability of the so-called 'Big Bore' 4566cc powerplant from late 1951 onwards brought a welcome increase in flexibility and acceleration. However, despite the excellence of the 'basic' car, there remained a core of Bentley enthusiasts who found its styling too anonymous. Only in production for two seasons, just 1,202 'Big Bore' MKVIs were made.

Finished in white with blue / grey leather upholstery, this particular 'Big Bore' example is described by the vendor as being in "good" condition with regard to its four-speed manual gearbox, electrical equipment, interior trim, bodywork and paintwork. Purchased from our October 2nd 2002 Buxton auction as "a two owner car" that was "believed but not warranted to have covered 58,872 miles from new", '378 FSM' is since said to have been treated to "a repaint, stainless steel exhaust and engine overhaul (camshaft, pistons, main bearings etc)". Despite the latter work being carried out in November 2005, the Bentley reportedly has a tendency to "overheat in traffic" which given its present usage as a wedding car is less than ideal. Though, we are informed that the MKVI behaves rather better when on the open road. Showing an unwarranted 61,647 miles to its odometer, this tempting Bentley is offered for sale with "copy invoices totalling approximately £10,000", current MOT certificate valid until June 2010 and historic class (free) road tax.
Share: