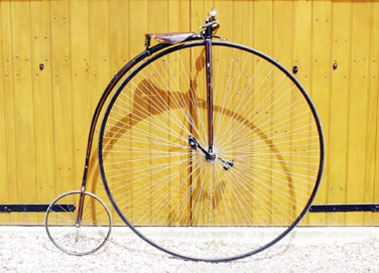 The Ordinary, or Penny Farthing as it was more commonly known, was first invented in 1871 by British engineer James Starley. It consisted of a small rear wheel and large front wheel, with rubber tyres, pivoting on a simple tubular frame. The Surrey Machinist Company were makers of the "Invincible" series of bicycles and tricycles, and its proprietor Mr. J.S. Smith, together with his wife, made a famous tandem pair. Mrs Smith being the only lady in the world to hold a medal for track records and in 1887 she and her husband beat the world amateur records from 21 to 25 miles on a tandem tricycle.
In the days of Ordinary racing the field was dominated by The Hon. Ion Keith Falconer and Dr. Herbert Liddell Cortis. Cortis, at six feet two and a half tall and regarded as the undisputed master of the cycle track, was the first man to pass the elusive target of twenty miles within the hour. After several attempts and assisted by a team of best pacers, this was finally achieved at the Crystal Palace track on 27th July 1882. Cortis was riding a 60" Invincible.
Dating from 1880, this impressive machine is the only known survivor of the marque. It has D.S.H.R. rims, an Invincible rigid 96 spoke wheel, Invincible rear forks and original rat-trap pedals. It is said to be in excellent condition for both riding and display purposes.