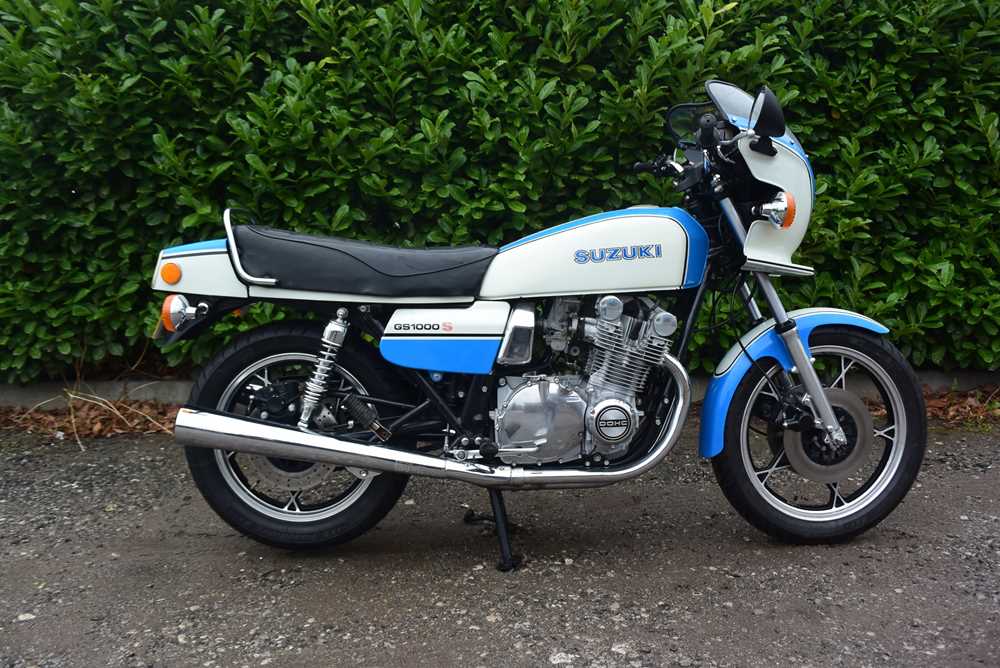 The Suzuki Motor Co. was established in 1909 by Michio Suzuki to produce machinery for the cotton industry. An initial diversification into 4 wheeled transport was curtailed by WW2 but after the war Japan had a need for cheap reliable transport so Suzuki, like a lot of others around the world, began to produce clip-on engines for pushbikes. These proved to be an immediate success and soon they were making full motorcycles and by the early 60s were second only to Honda in numbers of two-wheelers manufactured. Better known for their two strokes Suzuki joined the four stroke revolution in 1977 with the GS750, a bike that matched European standards of handling but with Japanese build quality and performance levels. A year later the full 1000cc version was launched setting a new benchmark in the superbike division. In 1979 the 'S' version arrived sporting a nose cone fairing, 18" rear wheel and race inspired paintwork going on to dominate AMA superbike racing in the USA with riders such as Wes Cooley and Graeme Crosby.

Finished in the most sought after blue and white Suzuki race colours this GS1000S comes with more than 60 receipts for restoration work and parts supplied adding up to over £5000, not including the 'DGM33922S' marked exhaust system sourced for over £1500 from America. Included in that total is a receipt from S.E.P. for an engine overhaul (£1555), one from Ferrett Electrictrickery (£800) for constructing a new wiring harness and fitting a Boyer Brandson ignition unit as well as numerous genuine Suzuki parts supplied mainly by Crooks Suzuki. Fitted with some nice chrome aftermarket rear shocks, the original Suzuki ones are included as well as numerous other parts accumulated over the years such as a pair of N.O.S. side panels and Haynes and genuine Suzuki workshop manuals. Bikes from this era are fast appreciating classics whilst still being usable in modern day road conditions.