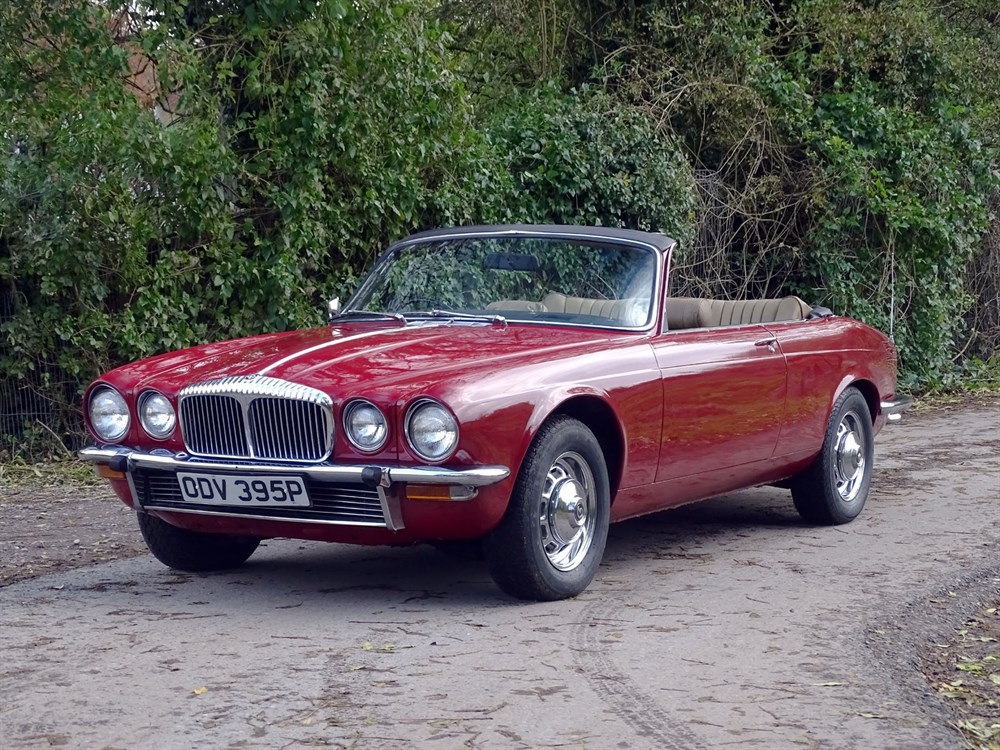 - 1 of 1,586 examples made, reconfigured as a Roadster many years ago, Beige leather upholstery

- Current ownership since 2006, registered with the DVLA as a Convertible, Engineer's Report re chassis strengthening

First road registered as '6666 MX' by Middlesex County Council on February 13th 1976, this sleek two-door Daimler was reconfigured as a four-seater Roadster many years later. An accompanying engineer's report from Forge Garages of Gillingham, Dorset notes that runs of steel box section have been continuously seam welded along the entire length of each sill to compensate for the roof's removal. The same document also comments: 'The two long doors of 'ODV 395P' have not sagged on their hinges and they do not foul the top of the door sills, as might be expected of a poor conversion. When driven the car exhibits no signs of scuttle shake. In short it is perfectly satisfactory and structurally a very sound conversion'. Sparingly used since entering the current ownership in 2006 and insured for £5,000, the past 1,000 miles have seen the Daimler treated to the following new components: fuel pump, rear springs (x4), rear shock absorbers and rear brake pads not to mention a manual choke conversion and full tonneau cover. Described by the vendor as 'scruffy in places but great fun', he also states 'the engine is tired with some timing chain noise' not that this has stopped the Roadster 'wafting along country roads on sunny days'. Accompanying paperwork includes a V5C Registration Document, the aforementioned Forge Garages Engineer's Report (dated 2012), David Manners Ltd invoices and sundry old MOTs. Full convertible versions of the XJ-C were offered by both Avon-Stevens and Lynx, 'ODV 395P' is nothing so grand but still a decidedly rare sight. Sidelined by the seller's ill health for the past two years, the Daimler has recently been got going again and is expected to possess a fresh MOT certificate (or fail sheet) by the time of sale.

Jaguar's original XJ Saloon (retrospectively dubbed the Series 1) and its Daimler counterparts were introduced in 1968 and were the last models to bear the personal input of Jaguar's founder, Sir William Lyons. The striking two-door Pillarless Coupe derivative was first shown five years later, at the 1973 London Motor Show. Production was heavily delayed, however, and did not get fully underway until 1975. The newcomer was based on the short wheelbase Saloon and featured suitably lengthened versions of the standard car's doors. All examples left the factory with a vinyl covered roof, though these have subsequently been removed from some of the surviving cars. There were two engine options - a 4.2-litre version of the ubiquitous DOHC XK unit and the 5.3-litre V12 unit. The smaller-engined version came with the choice of manual or automatic gearbox - initially the Borg Warner Model 12, but later the much-vaunted GM Model 400 Hydramatic unit. The silky smooth suspension was independent all round with wishbones and coil springs at the front and wishbones, radius arms and coil springs at the rear. Braking was by discs at each corner and steering by rack and pinion. A total of 10,426 Jaguar and Daimler Coupes were produced before production ceased in 1978 - 8,214 sported the 4.2-litre engine.
Share: