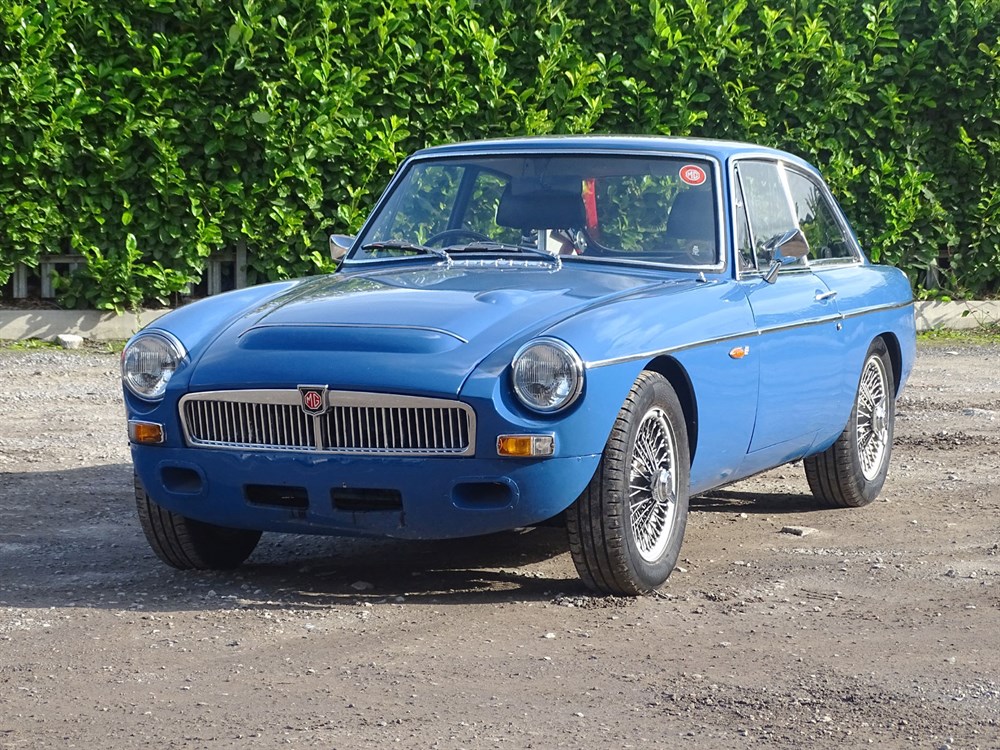 According to its accompanying British Motor Industry Heritage Certificate, this particular example - chassis G-CD1/3535-G - was built on August 26th-27th 1968 and despatched to Kennings Ltd of Harrogate less than two weeks later. Originally finished in Mineral Blue with Black upholstery and road registered as `PDN 325G' on October 1st 1968, the MG was specified with a heater, overdrive and wire wheels. Resident in Devon by 1973, the earliest service invoice on file was issued by Evans Garages (Roundham) Ltd during November that year at 54,300 miles. Belonging to Chris Griffin of Wolverhampton in the early 1990s, he treated the C GT to a considerable number of new components as part of a general refurbishment. Purchased by Andy Smith Esq of Ashford Kent from G. Fleming & Sons on 26th May 2003, the 2+2-seater was entrusted to Maidstone Sports Cars for some £4,781.14 worth of fettling shortly thereafter (new head gasket, water pump, Moto Lita steering wheel, servo kit, front discs / callipers, rear shock absorbers etc). Exported to Denmark in 2005 and road registered there as `XM59135', the MG benefited from an engine overhaul during 2006-2007. The then owner, Peter Nobel, decided to fit Sebring style front and rear valances plus a larger bore exhaust. Maintained for him - and subsequent keeper Arne Sorensen - by Lars Borsig Classic MG, the C GT was sold to its last registered keeper, Per Olesen, in 2012. Mr Olesen had chassis G-CD1/3535-G repainted Mineral Blue and fitted with more comfortable front seats plus an oversize rev counter and auxiliary voltmeter and oil temperature gauges. Regularly serviced and undersealed before its sale to the vendor in May 2017, the MG has since been dry stored. Running and driving during our recent photography session (October 2019), the C GT will need to be NOVA declared and MOT tested should a new owner wish to re-register it in the UK. Pleasingly retaining its original engine, the 2+2-seater rides on silver painted wire wheels shod with Continental tyres and sports an alternator plus 8mm plug leads. Only being offered for sale because the vendor has his hands too full with three Big Healeys, this appealing MG C GT is accompanied by an original handbook, history file, parts lists, pair of correct-type front seats, non-eared spinners and front / rear bumpers.
Share: