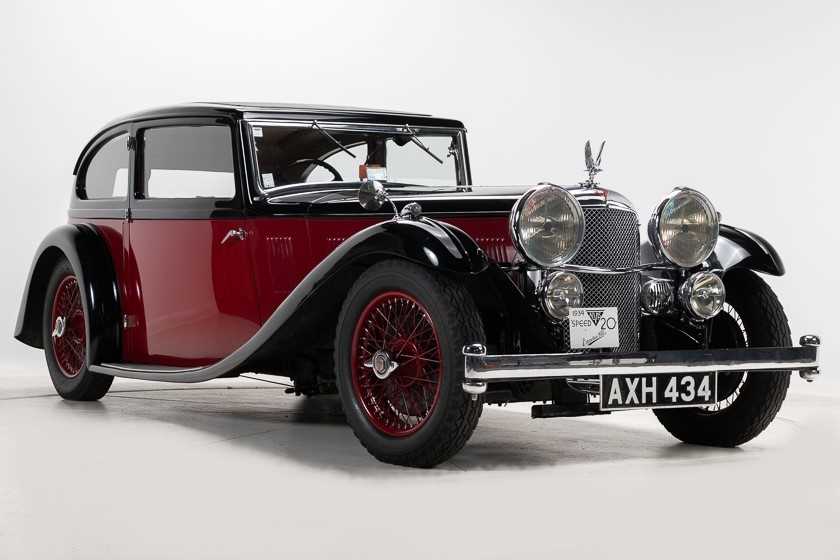 A mercurial character who became renowned within the London motor trade for sourcing the very best pre-owned exotica, Charles Follett would travel anywhere in the UK for the right car building-up an enviable client base in the process. A member of the Brooklands set, his ‘black book’ comprised society’s elite from racing drivers to celebrities via members of the aristocracy. Given sufficient funding to buy showrooms in the heart of Mayfair, he became the Alvis concessionaire for London and the Home Counties during 1931. Seriously impressed at the Coventry firm’s engineering integrity but dismayed at the staidness of its offerings, Follett set about turning the marque into a Lagonda, Sunbeam, Invicta and (later) Bentley rival. Decades before Jaguar came up with its famous ‘Grace . . . Space . . . Pace’ slogan, he was adamant that all three were intrinsic to making a car appeal to wealthy buyers.

Introduced in late 1931, the Alvis Speed 20 SA was the first model which Follett could really sink his teeth into. Based around a low-slung, double-dropped chassis frame, powered by a lusty 2511cc OHV straight-six engine and boasting 90mph performance, it proved an ideal canvas for the coachbuilder’s art. Conscious that Vanden Plas’ order book had thinned considerably due Rolls-Royce’s acquisition of Bentley and the subsequent hiatus in the latter’s production, he approached the London company with a bold proposal. Follett would order a minimum of 100 bodies from them if they would (a) cut the average cost from £600 to £195 per chassis and (b) devise a range of suitably rakish designs over which he would have sign off. Vanden Plas capitulated and came up with a notably stylish Saloon, Tourer and Drophead Coupe which The Autocar hailed as ‘very attractive special bodies’.

Often at loggerheads with Alvis’ supremo T.G. John and his chief engineer G.T. Smith-Clarke over the ‘unnecessary’ expense of a la mode coachwork, Follett once denied the pair access to their own boardroom while he laid out the £895 required to buy a Speed 20 in one pound and ten shilling notes just so they would better appreciate that looks and amenities were as important as driving dynamics when such sums were involved. Embracing the ‘Race on Sunday, Sell on Monday’ ethos, Follett campaigned a series of Alvis cars at Brooklands. Evolving from SA to SB guise in September 1933, the Speed 20 gained a four-speed all-synchromesh gearbox, independent front suspension and adjustable rear dampers. While, stylistically the model was enhanced via a forward sweeping scuttle / bonnet join line, 19-inch wire wheels and larger Lucas P100 headlights. Again tasked by Follett with clothing the Speed 20SB to best effect, Vanden Plas produced a variety of open and enclosed bodies the best looking of which was undoubtedly a two-door saloon cum fixed head coupe known as the ‘Flatback’.

A close-coupled, Four Light design with notably slim A-, B- and C-Pillars, the ‘Flatback’ also sported a distinctive swage line that accentuated its airy glasshouse and ‘letter box’ rear window. A spectacular exemplar of the ‘airline’ styling trend which captivated the automotive industry on both sides of the Atlantic during the mid-1930s, the Speed 20 SB ‘Flatback’ is arguably the best-looking enclosed Alvis ever made. Indeed, for many its desirability is second only to that of the (again) Vanden Plas-bodied 4.3 Litre Short Chassis Tourers. Often finished in two-tone liveries, the four-seater sported extravagantly peaked, full flowing wings as well as a louvred scuttle and external fuel filler neck. Long prized by collectors for being among the most elegant pre-WW2 Saloons, only eight of the thirty-six Speed 20 SB ‘Flatbacks’ made are known to have survived to the present day. Interestingly, the last one to go under the hammer fetched $198,000.

First registered in London on 24th January 1934 (or so its expired ‘AXH 434’ number plate would imply), chassis 11154 had migrated to West Sussex and the care of Frederick James Scott some twenty-one years later. Mr Scott kept the Alvis until Christopher Charles Storrar took possession during July 1970. Acquired by the famous W.O. Bentley dealer Stanley Mann the following November, the Speed 20 SB was sold to New Zealander David Curry shortly thereafter. Treated to an engine overhaul before passing to fellow Antipodean Joe Marsden in 1973, the ‘Flatback’ Saloon was subsequently treated to an extensive restoration that spanned two decades and was not completed until 1990. Having refurbished the Alvis as a retirement project, Mr Marsden finally relinquished it to the then President of the Alvis Car Club of New Zealand, John St. Julian during 2008. Loaned to a member of the British Bentley Drivers’ Club the next year for a rally, the Speed 20 SB was forced to retire with a broken crankshaft. A new billet replacement was made by a firm in Melbourne and the camshaft reground to the original profile with new bearings being fitted throughout etc. However, with all Mr St Julian’s other commitments and cars, the ‘Flatback’ Saloon was in need of some recommissioning when it entered the current ownership in 2017. A committed Alvis enthusiast, the vendor has gone through the Speed 20 SB and got it running to his liking. As well as refurbishing the cooling system (radiator clean and repair), he has had the magneto rejuvenated and new brake linings installed throughout.

The seller informs us that: “There is a thermostatically-controlled electric fan fitted with a manual override (the model was not specified with a mechanical fan when new). In our hottest summer temperatures ever recorded (37.5 Celsius) the car performed perfectly during the annual Art Deco parade through the town of Napier (Art Deco Capital of The World), driving in 1st gear for 40 minutes without the fan coming on once. I have also converted the accelerator to the right of the brake pedal, as I have been driving for over fifty years and was prompted to do so after a very close call with a fence! The pedal layout can be returned to original configuration in five minutes if you are concerned with absolute authenticity. The trafficators ‘flash’ and there are indicators at all four corners for safety. These are integrated rather than being external additions. All original fittings are present on the car. These include: the built-in jacks front and rear, the Luvax adjustable rear shockers and the one-shot lubrication system. The extensive history file documents the restoration carried out by Joe Marsden as well as the additional work done by John and myself. It further includes the old-style UK buff logbook and registration plates, which are still on the car. The Alvis starts and runs very well and I have no hesitation in driving it anywhere”.

PLEASE NOTE: We have had a number of enquiries on this Lot from collectors around the globe. As such, we have asked www.shippio.com to provide quotes for delivery to various destinations. These are outlined below together with more information for UK bidders.

First section: is applicable to movements from Auckland to the non-UK destinations. The below charges include:

Auckland to Tokyo departing on a weekly service with a 15 day transit on the water – GBP 2815.00

Second Section: is applicable to the movement of your clients vehicle from Auckland to the UK.

As a summary, when importing a vehicle, you may like to consider the following things:

Based on our NZ transporter collecting the 1934 Alvis Speed 20SB Vanden from Napier back to our Auckland receiving depot, the vehicle will be processed, loaded into a container and shipped to arrival into UK port. We will then clear through customs ready for your client to collect from our Felixstowe, GB depot (We can arrange forward delivery to your clients address if required).

You will also need to pay any import duties and VAT on import of the vehicle into the EU, however as your client's vehicle is over 30 years old, we will work to import at the reduced values of 5% VAT and zero duty.

These are calculated as follows:

You client is quite welcome to collect their vehicle from our Felixstowe, GB depot. Alternatively we can deliver to your client's address by fully enclosed car transporter service. If you can advise me the delivery address I will get a price for you.

The shipping lines only provide a very basic level of cover (typically £1.60 for every kilo), therefore a 1500 kilo vehicle would only have very basic insurance in the region of £2400.00 The alternative is for us to arrange an enhanced liability transit insurance policy to cover the vehicle to its full value for loss or damage during transit. This is calculated as 2% of the combined value of the vehicle + freight + 10%.

For any further queries please feel free to contact Shippio direct via info@shippio.com