Visitors to the H&H Classics auction at The Pavilion Gardens in Buxton on April 27th will find a menu that satisfies all tastes, with automotive starters, mains and dessert all available.

At auction are no fewer than 111 classic and collector cars covering some 40 leading automotive marques.

Some of the most delicious offerings include:

This 1972 Jensen Interceptor is one of only 25 Reef Blue cars built (from a total SP production run of 232) and is the fastest ever Interceptor with more power and torque than a Ferrari 365 GTB/4 Daytona or Lamborghini Miura P400SV. With more grunt than such contemporary supercars, the Jensen was found capable of 0-60mph in 6.9 seconds and 143mph by Autocar magazine.

This delicious SP was previously supplied and fettled by renowned marque specialist Cropredy Bridge at a cost of £71,000. Believed, but not warranted, to have covered just 54,600 miles from new with an extensive history file (including copy factory build records). Power steering, air-conditioning, electric windows, Radiomobile 8-Track player and LED interior lights.

“If the Jensen SP can be summed up in one word, then that word unquestionably is “relentless”. This big, beautiful car seems to flatten hills, ignore bends, smooth out bumps and just keeps pounding on and on.” (Sports Car Road Tests, Volume 9, 1972).

Rarer than the FF which preceded it as Jensen’s flagship (232 vs 320 cars built), the SP was further notable as the fastest and most potent Interceptor ever offered by the West Bromwich marque. SP stood for ‘Six Pack’, a reference to the three two-barrel carburettors which sat atop the model’s high-performance 440ci (7.2 litre) V8. Sourced from Chrysler’s Mopar division, the engine boasted some 385bhp and 490lbft of torque and was thus some thirty percent more powerful than the 383ci (6.3 litre) V8 used in previous Interceptors. More highly strung than its siblings, the SP ran on its central carburettor for much of the time, with a particular technique being rewarded when engaging (or disengaging) the auxiliary carburettors. The jump in performance from having two to all six carburettor barrels engaged could catch out the unwary to the extent it is estimated that some 25-30% of SPs were converted to a tamer Carter Thermoquad carburettor set-up ‘in period’. 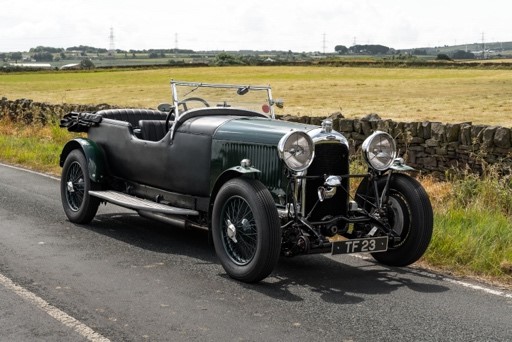 This 1973 Jaguar E-Type V12 Roadster is finished in BRG perfectly coupled with a Moss Green leather interior from new and is offered with Heritage Certificate plus a large collection of invoices, 65,505 recorded miles and in its current ownership since 2015.

Autocar said of this model:

"The turbine-like smoothness with which the engine provides a sustained shove in the back is almost uncanny, the more so when one accelerates hard in top gear without even a gearchange to interrupt one's headlong dash into the distance."

By 1971, Jaguar's jaw-dropping E-Type had been in production for a decade. Despite continual improvements, new emissions legislation in the all-important American market threatened to strangle the big cat's performance. Jaguar responded by giving its revered sportscar fresh claws in the shape of a 5343cc V12 developed from the stillborn XJ13 Le Mans project car. The new engine was both effortlessly powerful and eerily refined.

With some 272bhp and 304lbft of torque on tap, the Series III E-Type once again had 150mph in its sights. A revised wheelbase yielded better cabin space, and in conjunction with wider front/rear tracks, new anti-dive front suspension geometry and fatter tyres gave improved road holding. Imbued with a more muscular stance thanks to its flared wheel arches, re-profiled wings and larger grille, the model also boasted vented disc brakes and a restyled interior.

Built on 20th March, 1973, Chassis No.1S1819BW left Browns Lane for distributor Henlys of London with Engine No. 7S1819SB; that meant a V12 configured 5.3 litre (5343cc) engine with automatic transmission. This example possesses a Jaguar Heritage Certificate to show that it still wears the same exterior and trim specification and running gear as of March 1973. Ordered in British Racing Green it has the beautifully complementary Moss Green leather interior with a Black soft-top. In 1998 the gearbox had an overhaul at c.60,000 miles. Trevor Farrington Ltd of Knutsford carried out £3850 worth of recommissioning work in July 2018. Cheshire Classic Cars Ltd provided £3930 of detailing in 2016. Understood to have had just five former keepers since August 1973, the vendor became custodian in 2015. A matching chassis and engine numbers example which displays a credible 65,505 miles, it's accompanied by V5C are old MOT documents, a current MOT and original E-Type operating, maintenance and service handbooks. The vendor advises the Jaguar drives ‘very’ well and for some peace of mind possesses an MOT until January 2023.

One of just 787 Pierce-Arrow cars built during the 1936 model year, this magnificent American beast is powered by a 6.3 litre straight-eight engine allied to a three-speed, all-synchromesh manual transmission. Reconfigured as a soft-top during the 1950s and laid up during the following decade in California it has been the subject of an extensive restoration for over fifteen years or so (the costs were reputedly £100,000 plus).

Sympathetically uprated with a full-flow oil filtration system, Kenlowe fan and power steering, this is a rare, imposing and usable post-Vintage thoroughbred.

A merger with Studebaker in 1928 helped the Buffalo, New York-based firm through The Great Depression but a refusal to move downmarket ultimately sealed its demise a decade later. Renowned for its excellent engineering, Pierce-Arrow stuck with separate chassis construction and side-valve engines throughout. Although, such design conservatism did not prevent Ab Jenkins from averaging a record-breaking 117.77mph for 24 hours aboard a Pierce-Arrow Convertible in 1933; the same year that the company standardised hydraulic valve lifters and power-assisted brakes.

Thoroughly revamped for the 1936 model year, the Pierce-Arrow range sat atop a new ‘super frame’ that boasted no fewer than five cross members plus a large cruciform brace. Visually updated with a narrower radiator grille and quad headlamps, the straight-eight and V12 models on offer could be ordered with a choice of wheelbase lengths and open or closed coachwork. Priced at $3,195 which was roughly twice the cost of a Cadillac Series 60 or over five times the cost of a Ford V8, the Pierce-Arrow Model 1601 was powered by a 385 cu in (6.3 litre), 150hp straight-eight engine allied to three-speed synchromesh manual transmission complete with automatic overdrive and freewheeling. Marketed as ‘America’s finest motor car for America’s finest families. According to a handwritten note on file, ‘834 YUK’s’ previous owner James D. Olson maintained that chassis 314394 acquired its current Roadster coachwork in 1956, courtesy of Marmon Automobiles of South Pasadena, California. Reputedly laid-up the following decade, the Pierce-Arrow remained in The Golden State until being imported to the UK during September 2003. A previous keeper, not long thereafter (last but one), is understood to have spent some fifteen years and over £100,000 (including the purchase price) bringing the Model 1601 up to its current condition. As well as reportedly receiving attention to its engine, gearbox, axles, running gear, chassis, electrics and interior trim, ‘834 YUK’ has been sympathetically updated with a Kenlowe fan, full-flow oil filter and power steering. Much of the engine work was carried out by the respected Bedfordshire firm Mass Racing Ltd, while D.S. Thompsett of Cambridgeshire renewed the leather upholstery, weather gear (hood, side screens) and carpets etc. Valued for insurance purposes at £80,000 just last year, this rare post-Vintage thoroughbred is worthy of close inspection. It is offered for sale with a V5C Registration Document and a history file.