IN ORIGINAL CONDITION FOR SALE WITH H&H CLASSICS LIVE AUCTION ONLINE ON JUNE 24.

This splendid example of a 1934 Lagonda M45 T7 Tourer, among the most desirable and sporting Lagondas ever made, is coming up for sale with H&H Classics at their June 24 Live Auction Online. Estimated to sell for £100,000 to £120,000 it still has its original factory T7 coachwork.

Supplied new by Warwick Wright Ltd to A.H. Mann Esq of the tobacco firm John Player & Sons it has a  well documented ownership chain and has been in the current family since 1991. 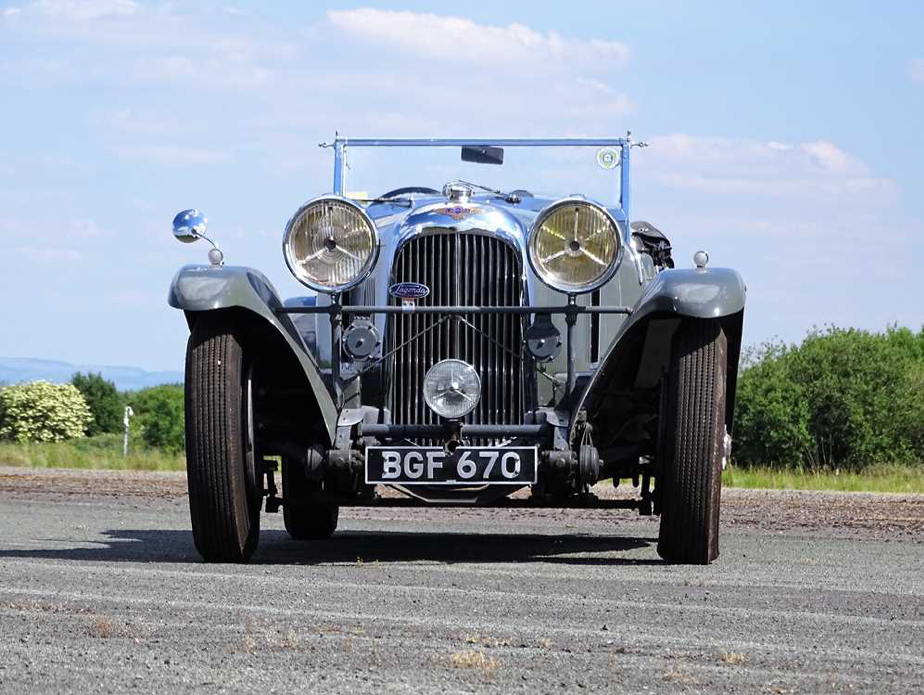 The car pleasingly retains much of its original leather upholstery and other fittings and fixtures. Assessed by renowned marque specialist Peter Whenman of Vintage Coachworks in 1991 he concluded: “This is a very nice, original car not over-restored, in need of some care and attention and probably one of the best available at the moment.”

The last MOT certificate expired in 2010. The car is running and driving but in need of recommissioning.

Damian Jones Head of Sales at H&H Classics, comments: “The M45 impressed our team with its grunt during a recent airfield photography session. Besides its original leather upholstery the Lagonda also boasts the correct scraped cross hatch finish to its rocker box cover, twin Vokes triple gauze air filters and a host of other authentic under bonnet details.”

“A highly desirable Post Vintage Thoroughbred with a well- documented ownership chain and charm to spare, this delightful M45 is worthy of close inspection. It is offered for sale with green logbook, handwritten provenance and history file.” 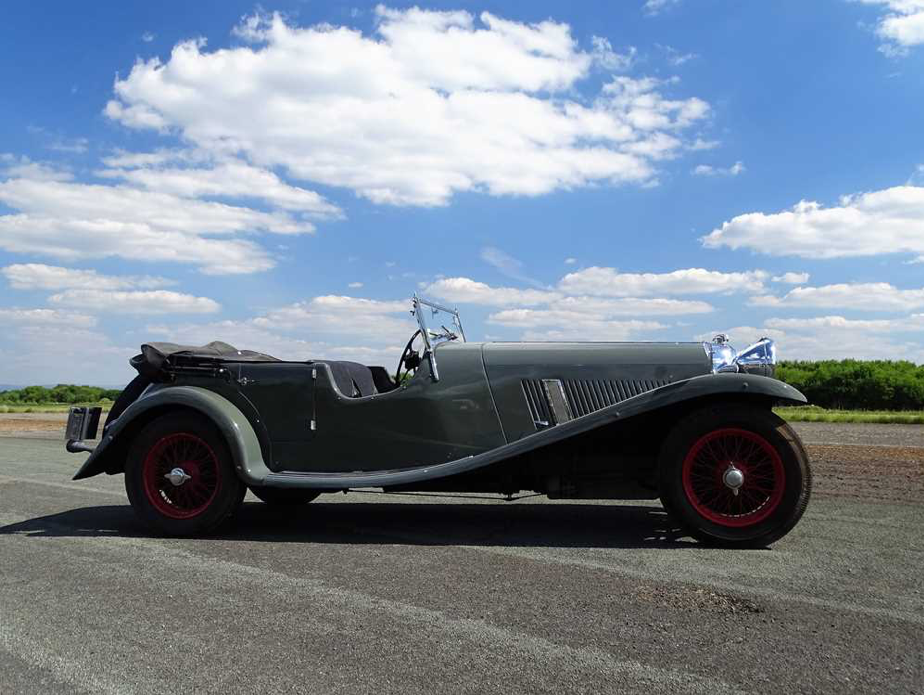 Issued with the London registration number ‘BGF 670’ on 17th August 1934, chassis Z11038 was supplied new by Warwick Wright Ltd of Mayfair to A.H. Mann Esq who reportedly kept it until his death thirty years later. A director of the tobacco firm John Player & Sons (which famously sponsored the Lotus Formula 1 Team from 1968-1986), Mr Mann initially had the Lagonda serviced by Flewitts Garage of Nottingham before subsequently entrusting it to the JPS Motor Pool for maintenance. Acquired by Dennis Roberts Esq of Cold Springs, near Buxton on 3rd June 1964, the M45 then passed through the hands of Margaret Jane James of Diss, Norfolk, Donald Archbell Esq (a director of Waddingtons), Ian Ross Esq. (a director of Manor Bakeries Ltd), Richard Pettit Esq. of the Stratford Motor Museum and Peter Walker Esq before entering the current family ownership on 4th December 1991. 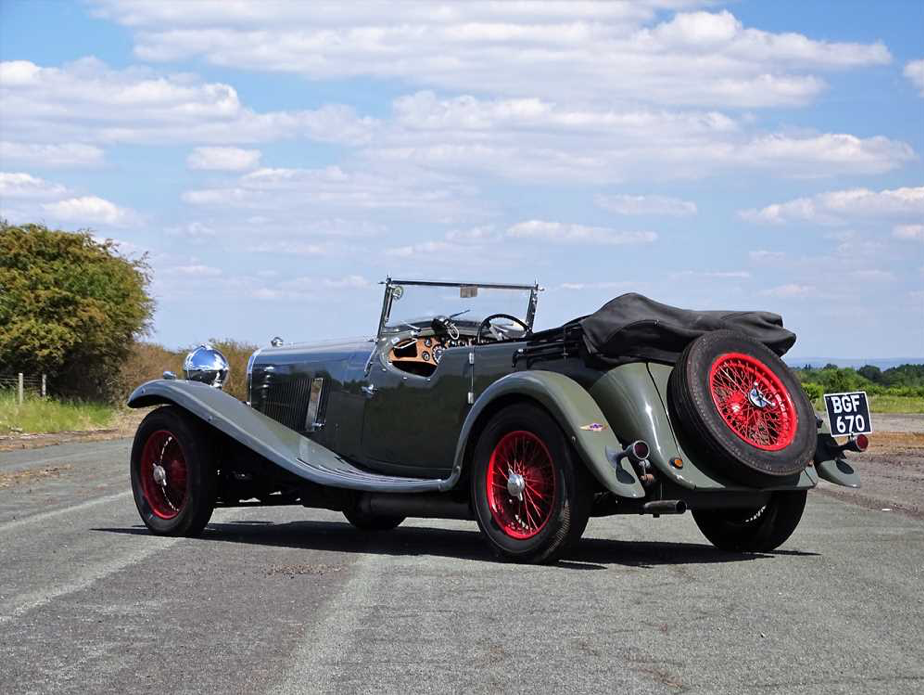 It was treated to an extensive mechanical overhaul by John Ambler of Bingley, Yorkshire (a WO Bentley specialist) in the mid 1970s. ‘BGF 670’ made four pilgrimages to the Le Mans 24- hours during Mr Ross’s tenure (1984-1989), and appeared in a CBS Television programme about the race. Commissioned by the vendor's family to carry out a pre-purchase inspection, Peter Whenman of Vintage Coachworks completed his detailed report on 28th November 1991.

Dry stored for the last decade, old MOT certificates on file suggest that the M45 has covered a mere 2,000 or so miles over the past twenty-nine years. 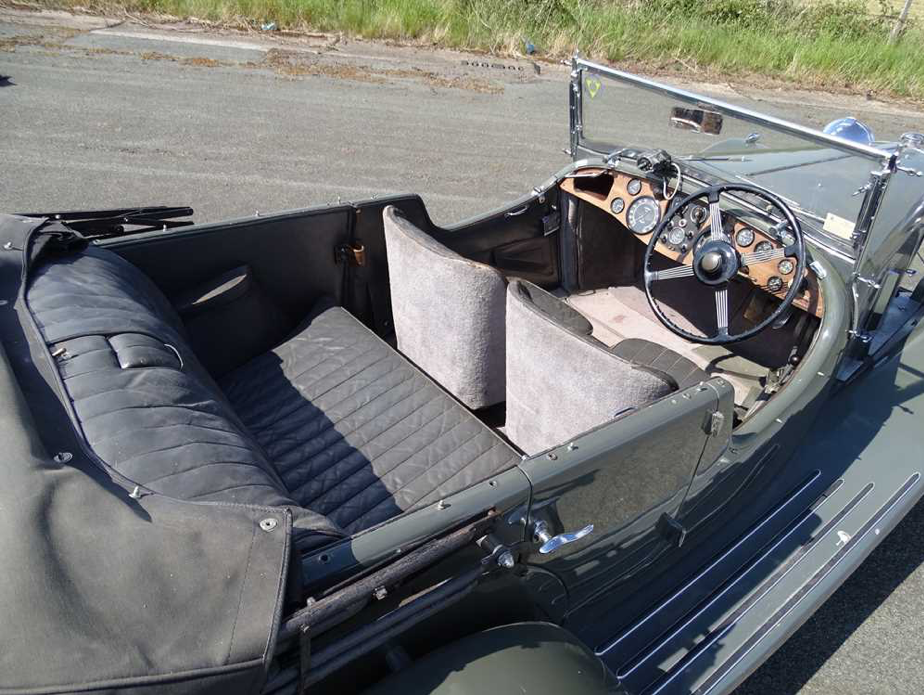 Introduced at the 1933 Olympia Motor Show, the M45 remains for many the ultimate sporting Lagonda. Derived from that of its 3-Litre ZM series predecessor, the newcomer’s chassis was very much Vintage in flavour featuring a 10ft 9in wheelbase, all-round semi-elliptic leaf-sprung suspension and four-wheel drum brakes. Doubtless influenced by the Monte Carlo Rally win and Brooklands triumphs that Invicta had achieved since fitting the proprietary Meadows 6ESC 4453cc OHV straight-six engine to its products, Lagonda chose to install the same powerplant and associated Meadows T8 four-speed gearbox aboard the M45.

The result was among the fastest cars that money could buy with closed examples able to exceed 90mph and open ones, given the right conditions, punching past 100mph. Contemporary reports in Autocar and Motorsport magazines praised the Lagonda’s ‘brilliant acceleration and sheer performance’ as well as its ‘high power-to-weight ratio’ and ‘easy running in a way that can be achieved to the fullest extent only by a big-engined machine working well inside its limits’.

The Staines manufacturer had amply demonstrated this latter point during pre-production testing when a prototype took fourteen hours less to cover the 1,500 miles between Dieppe to Brindisi than an express train! Arthur Fox and Bob Nicholl whose specially prepared Roesch Talbot 105 cars had done so well in international races and rallies were quick to spot the potential in the new Lagonda. A trio of shorter wheelbase, skimpily bodied and tuned M45 racers took the Team Prize at the 1934 Ards TT with one of their number claiming outright victory at the following year’s Le Mans 24 hours against Alfa Romeo 8C 2300 opposition (the Fox & Nicholl Team Cars’ specification inspired that of the M45 Rapide). Understandably popular not just with sporting motorists but also racing drivers and celebrities, some 410 Lagonda M45s (and 53 Rapides) were made from 1933–1935. The vast majority wore factory coachwork with the T7 Tourer body being particularly prized by collectors because of its devilishly handsome lines and comparatively light weight.

Many classic British grand tourers of this generation have been described as ideal for vintage rallying and long journeys at high speeds. Perfect for endurance events such as the 1000 Mile Trial or gentler tours, this Lagonda represents fantastic value against similarly engineered Bentleys and Invictas.

“If the best British workmanship and the finest materials appeal to you, and if character, sweet running and a maximum speed…are qualities that attract you, there is no need to look further; you will find them in this British car.”
This statement was from Lagonda’s sales brochure announcing the M45 model, a powerful car boasting some 4½ litres and rightly regarded as one of the most desirable of all post-vintage thoroughbred models.