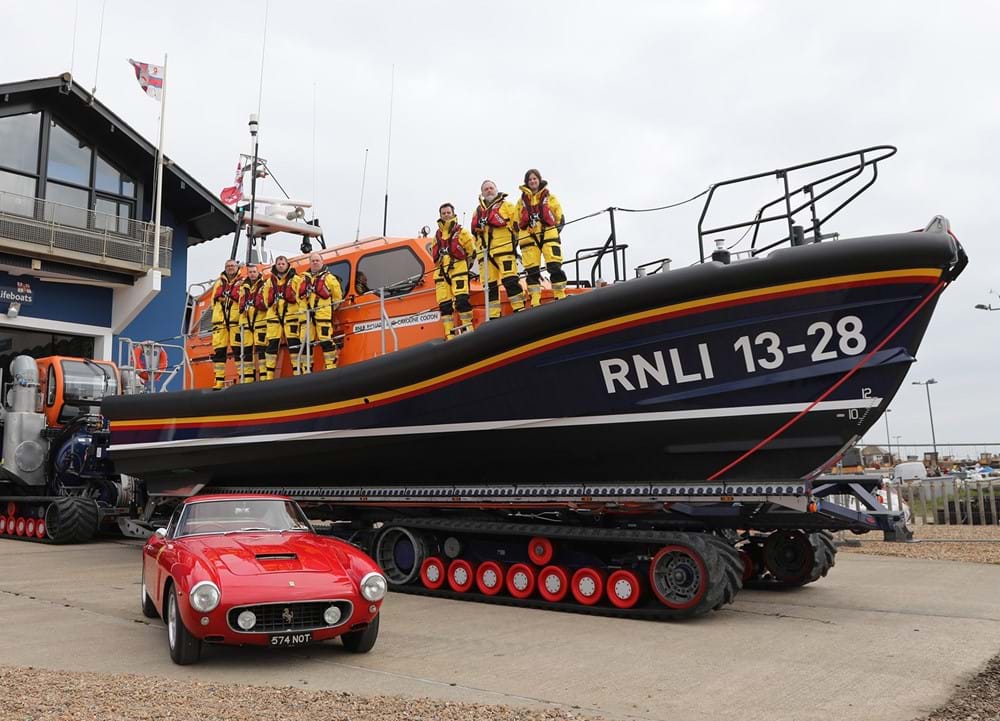 The Royal National Lifeboat Institution (RNLI) held the official naming ceremony of the Shannon class lifeboat stationed at Hastings on Saturday April 27. The all-weather boat has been funded by the generous legacy of the late Richard Colton who left two classic Ferraris to the RNLI in his will.

Businessman Richard Colton passed away in March 2015 and left an extraordinary legacy to the RNLI of two of the world’s rarest Ferraris. Part of the Colton bequest has been used to fund the all-weather lifeboat ‘Richard and Caroline Colton’ and a launch and recovery system for the lifeboat at Hastings, which is named: ‘Richard and Mark Colton’ after his son Mark, who died tragically when he was young.

Simon Hope, Chairman of H&H Classics, which holds sales across Britain, commented: “We were honoured to have been chosen to handle this sale of the two Ferraris which was of national significance. These stunning motor cars had been with Richard Colton for 40 years and meant a very great deal to him. So we were absolutely committed to realising the maximum amount for the cars, and it proved to be an historic sale, providing the single biggest bequest in the RNLI’s history.”H&H waived its sellers commission which meant that the RNLI received a further donation of £511,800 from Simon Hope. The sale of the 1960 Ferrari 250 GT was a world record for a steel bodied car.

Designed in-house by RNLI naval architects, the Shannon class lifeboat was introduced to the RNLI’s fleet in 2013. The Shannon class is the first of the RNLI’s all-weather lifeboats to be powered by water-jets rather than traditional propellers, making it the most agile and manoeuvrable lifeboat in the charity’s fleet.

The special ceremony, held at the lifeboat station, was attended by a large crowd who were welcomed by the RNLI’s crew and volunteers, along with the family of Richard Colton and dignitaries.

RNLI Hastings Coxswain, Phil Jones, said:“The naming ceremony and service of dedication is a very special day for everyone associated with the lifeboat station, and we are so grateful to the legacy of Richard Colton, for making this happen. His legacy will enable the station to carry out our lifesaving work and serve the community of Hastings.‘

Six out of ten lifeboat launches are only made possible by legacies, large and small, left to the RNLI in people’s wills. These gifts pay for the training and equipment we as lifeboat crew rely on when we launch into the unknown, in all weathers, day or night to save others.’

Richard Colton, a Northamptonshire businessman, had a distinguished career in footwear distribution and for 40 years collected and actively restored sensational classic cars. Described by close friends as “a shy and private man”, he was known to be somewhat nervous of the sea, which may have added to his great respect for the men and women who risk their lives daily around Britain’s coast.

Mrs Jo Adams, cousin of Richard Colton who performed the naming duties on the day, said:

‘As Richard’s first cousin and sadly the last surviving Colton, I, together with all my family and his friends are immensely proud of this wonderful gesture! It is of even greater significance personally because my husband and I have always been keen offshore sailors and recognise full well what the RNLI means to the sailing community amongst many others.’

‘What a great day! To see all those people, classic cars and ‘Richard and Caroline Colton’ looking spotless made for a very moving occasion. A fitting tribute to a fantastic legacy. Thank you to the RNLI for holding such a wonderful event.’