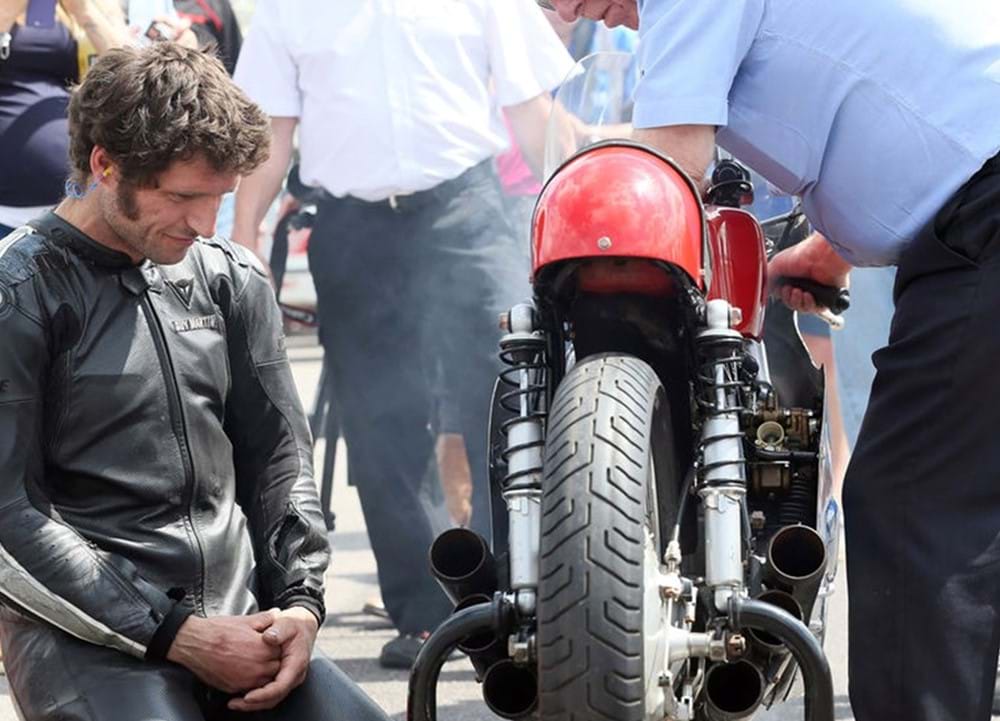 at the Castle Combe Classic Festival 2017

Some people like to think Guy Martin is a bit daft. However, his reverence, knowledge and passion for the RC174 Honda-Six proves he’s anything but. Honda’s legendary, near-mythical even, six-cylinder GP racers of the mid-1960s are among the most fantastic, exotic and alluring motorcycles ever built.

Mind-blowing technological marvels in their own right with pistons the size of thimbles, 24 valves and an 18,000rpm rev-ceiling, they not only sound like absolutely nothing else, they worked brilliantly, eventually dominating 250 and 350 GPs (indeed winning 1966’s 250 crown by the season’s midway point); becoming inextricably associated with arguably the greatest racer of all time, Mike Hailwood – who rated it the best bike he ever rode. And Guy doesn’t disagree.

“That’s the most amazing motorbike I have ever ridden,” was his verdict after eight laps of the Castle Combe circuit on George Beale's exact replica of the 50-year-old 296cc RC174 on Sunday. The product of an era when the Japanese corporation wanted to flex their engineering muscles, Hailwood won the 1967 350cc world championship on the infamous six-cylinder machine – and his son, David, was at Castle Combe to celebrate his father’s achievements.

Martin fulfilled a lifetime’s ambition by riding the exotic machine in a series of tribute laps to the nine-times world champion during Castle Combe’s annual (and only) two-wheeled meeting, the Grand National, on Sunday. The biggest crowd in over a decade flocked to the Wiltshire venue to watch the spectacle that also included an appearance by three-time Grand Prix world champion, Freddie Spencer.

“George Beale [the bike’s builder] told me not to do more than 16,000 revs but I had to roll off everywhere just to keep it to 16 because it just wants to go. I was expecting it to be a nightmare to keep singing, but although it isn’t the most usable bike, it was alright. It is half usable and it really goes.”

Guy is familiar with the Castle Combe circuit, having tested his superbike-spec Honda Fireblade there earlier in the year. His biggest struggle with the vintage Honda lay with the gearbox, which involves very close ratios on the high-revving multi and has a shift lever on the opposite side to Guy’s usual set-up. “You are going up and down the gearbox like a fiddler’s elbow,” was Guy’s description. “At Tower bend you are going back two gears on a superbike but on that bike you are going back five.”

If the Six was a car, it was a Ferrari 250GTO mixed with a Ford GT; if it was a movie star it was James Dean married to Marilyn Monroe. If it was a creature, it was a unicorn. In fact better: it existed. No machine demonstrates Honda’s abilities better. The Six was the culmination of Honda’s dream for GP dominance during a period of both an inexorable rise of the Japanese factories and (virtually) unlimited GP technical regulations.

By its very definition, the magic of the Honda Six is all about the engine and even the bare numbers are astonishing. It’s a four-stroke, DOHC, 24-valve, inline six producing peak power at 18,000rpm, a speed that wouldn’t be repeated until F1 began experimenting with pneumatic valves in the mid-1990s.

In RC166 form each cylinder had a bore of just 41mm, stroke of 31mm and was fed by valves the size of a rubber on the end of a pencil. The crankshaft was assembled from 13 individual parts each no bigger than a domino, and six tiny, 22mm Keihin round-slide carburettors fed the six cylinders via five tiny jets.

Hailwood came to define the Honda Six, and Guy was delighted to take part in the weekend’s tribute to ‘Mike the Bike’. “Hearing about how good Mike Hailwood was, was what I grew up with,” he explained. “That was all I ever heard from my Dad, and Neil Tuxworth says the same. All the current riders are good but they aren’t Mike Hailwood. He is the measure and he was an amazing bloke. He didn’t worry too much about set-up, he just got on and rode it. A lap of the TT on that would be bloody amazing,” he added with a longing look in the RC174’s direction.

“I’m always nervous when they go out, Guy is such a character and I have been very impressed by his mechanical knowledge. I think the combination of Guy and the Honda Six is the best you could imagine to attract the public’s attention. He has achieved his ambition now, and so have I."

The bike is one of eight super expensive RC174 replicas built by George Beale. John McGuinness has ridden one of Beale’s bikes in the past but the former pharmacist and sponsor admitted he was nervous as Guy Martin threw his leg over the £450,000 machine at Castle Combe.

Guy had proclaimed that having the chance to ride the Honda Six was one of the main reasons he was coming out of retirement when he signed to return to the roads for Honda Racing in January. Perhaps the 31-year-old imagined it would have been the swan-song to a victorious Mountain campaign. Instead it felt more like a consolation prize after his disastrous TT on the new Fireblade. He clearly enjoyed the experience nonetheless.

"It was the most nervous I’ve ever been, I went to sleep nervous and I woke up nervous. There have only been three bikes in history I have really wanted to ride, the Britten and my Pikes Peak Suzuki, which I’ve ridden – and now the Honda Six. And it was better than I ever thought it would be.”