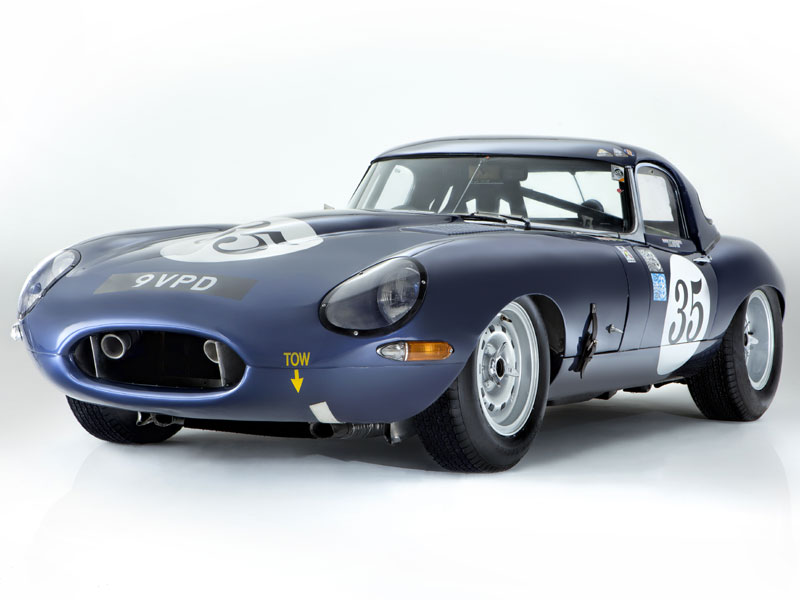 - Period and more competition history at the likes of Le Mans, Spa and the Goodwood Revival

Jaguar famously misjudged the effect its now immortal E-Type would have on the world. The reaction to its 1961 Geneva Salon launch was overwhelming and there was no way the company could hope to meet the instant demand; especially from the USA, its major market. Early UK cars were therefore necessarily few in number and only allocated to those who would use them to create further publicity. Even before the Swiss motorshow had closed its doors, Jaguar's chief designer, Claude Baily, had issued Project Specification ZP 537/24, the title of which was 'Variations Required To Build 7 Competition E-Type Cars'. The suggested modifications were in fact relatively mild and included: an increased compression ratio; polished con rods; gas flowed cylinder head and inlet manifold; lightened flywheel; and the provision of a close ratio gearbox. The fortunate few earmarked for the inaugural septet of racing E-Types were those who'd already successfully waved the Jaguar flag on track - ie John Coombs, Tommy Sopwith, Ecurie Ecosse, Peter Berry, and Sir Gawaine Baillie. Ultimately, Coombs, Sopwith and Berry were granted two each and Baillie one.

Coombs chose chassis 850006 as his lead car and in its first year it bore the company's well known registration 'BUY 1'. By the following season its identity had been changed to '4 WPD' and it went on to become the prototype lightweight E-Type and arguably the most important competition example of the model. The firm's second car, chassis 850007, was completed on March 29th 1961 and officially road registered as '9 VPD' four months later. It effectively served as a spare for the team and, other than reputedly being entrusted to Graham Hill during testing at Goodwood, was not called into action until the Scott-Brown Memorial Trophy meeting at Snetterton on July 23rd 1961. Albert Powell had been due to pilot one of Peter Berry's Project ZP 537/24 E-Types (Chassis 850010, '3 BXV') before suffering a broken wishbone in practice, whereupon Coombs kindly loaned him '9 VPD'. According to Autosport he ran as high as fourth before dropping back and eventually retiring when a broken fanbelt led to overheating problems. No less that five of the seven ZP 537/24 cars were in action that day, with chassis 850005 ('ECD 400') and 850006 ('BUY 1', though the car did not carry plates at that meeting for some reason) finishing first and second respectively. Little more is known of 850007's period competition history other than it definitely led a much quieter life than '4 WPD'.

Sold off into private hands, '9 VPD' was purchased by the vendor in July 2002 in an extremely dilapidated but original state, having been left rotting in the open in Scotland for some 15 years. It was apparently while north of the border that it was repainted Red and acquired the Scottish registration '532 FS'. Acutely conscious of the Jaguar's historical significance he entrusted it to marque specialist Beacon Hill Garage of Hindhead, with instructions that they restore it as an FIA compliant racer while preserving as many of the original components as possible. Major parts of the original tub (body number R1017), including the front and rear bulkheads and spine, were employed in its reconstruction in steel, while the body panels were replaced with 'Lightweight' specification aluminium equivalents. All parts deemed 'surplus' to the restoration have been preserved for posterity, including: the original cylinder head, crankshaft, con rods, close-ratio gearbox, 'outside lock' bonnet, boot lid, doors, seats, hardtop and hood frame. The vendor even managed to recover the original registration, which had found its way onto a Scottish Range Rover.

Repainted in its initial livery of Opalescent Dark Blue, the re-born '9 VPD' returned to the track in time for the July 2005 Silverstone Classic Festival and later that year finished 4th overall in the Gentleman Drivers' two hour race at Spa in the hands of Steve Markey and Austin Kinsella. It was 4th in the 2006 Le Mans Classic (behind two Ford GT40s and an AC Cobra), and 3rd overall and 1st-in-class in the Spa 6-hours that same year, with former Le Mans winner Richard Attwood joining Steve Markey and Radical ace Austin Kinsella behind the wheel. It was the first Jaguar home and 3rd-in-class in the 2007 Le Mans Legends race, the year in which '9 VPD' also made its Goodwood Revival debut, with rally legend Rauno Aaltonen co-driving alongside Steve Markey. Now a regular contender in the Goodwood Revival, Le Mans Classic and Spa meetings, chassis 850007's list of helmsman these days also includes Emanuele Pirro, Marc Gené and Tony Jardine.

This highly significant and beautifully restored racing E-Type is now on the button and ready for somebody new to enjoy.

PLEASE NOTE: The original parts mentioned in the catalogue description will not be on view at the auction. Photographs can be viewed at https://goo.gl/pnoFbS and viewing is available pre-auction by contacting John Markey on +44 (0) 1428 607899.
Share: