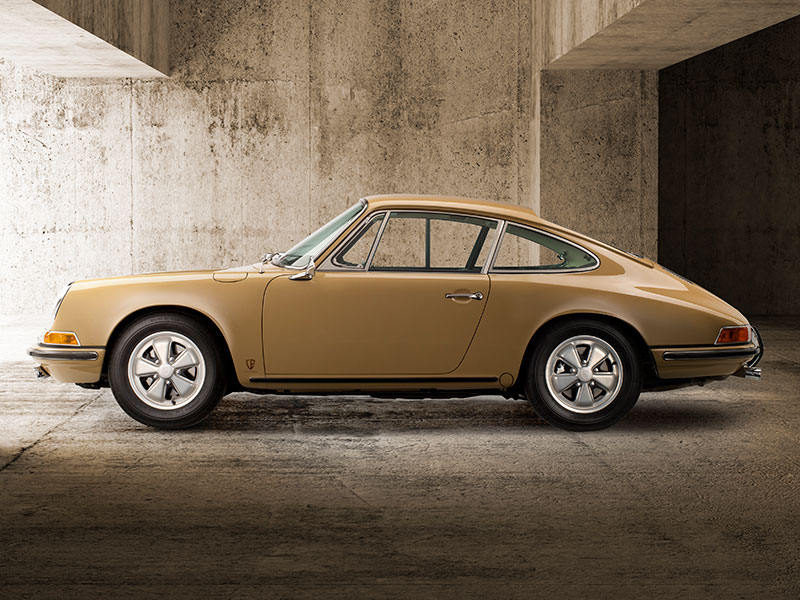 This splendid-looking 911S is the twin to Lot No. 84, in that it emanates from the same source, is from the same model year and is finished in the same combination of Sand Beige bodywork teamed with Black leatherette interior trim - there is even a YouTube video of the two cars driving together. The fundamental difference is that while the other Porsche has never been restored, this one has been the subject of a documented 1,500-hour refurbishment to 'arguably better than new' condition, courtesy of a German Porsche expert. Another left-hand drive example, it was sold new to the USA and delivered to its first owner in Texas on May 12th 1967. The second owner acquired the car in 1979 and it remained part of his private Tallahassee collection until 2015. It was the current owner who made the decision to have it completely restored. Dip coated in a cathodic bath for maximum rust protection, the bodywork was then re-painted using Glasurit products to ensure that it got as close as possible to original specification. Treated to a thorough mechanical overhaul, the Coupe also had its electrics and interior rejuvenated.

Introduced in late 1966, the 911S featured a more powerful version of its standard sibling's air-cooled 1991cc flat-six engine. Credited with developing 160bhp and 132lbft of torque thanks to a reprofiled camshaft, higher compression ratio, larger valves, better porting, and bigger carburettor jets etc, the newcomer also benefited from a rear anti-roll bar (to augment the front one), Koni shock absorbers, vented disc brakes and unsprung weight saving Fuchs five-spoke alloy wheels. With a 7,300rpm redline and evenly spaced gears (the exception being a notably tall fifth which permitted 100mph @ 4,200rpm), it was reputedly capable of 0-60mph in 8 seconds and 137mph. Able to humble more exotic machinery on road or track, the 2+2-seater could also catch out the unwary. Though, Car and Driver magazine commented: 'All told, Porsche's admonition, "not for the novice" is a bit gratuitous. Within normal driving limits and with reasonable caution, the 911S handles predictably, controllably, and head and shoulders above practically anything else on the road'.

This car now looks just like it did when leaving Porsche's Zuffenhausen factory and offers a great opportunity to acquire this highly desirable model.
Share: