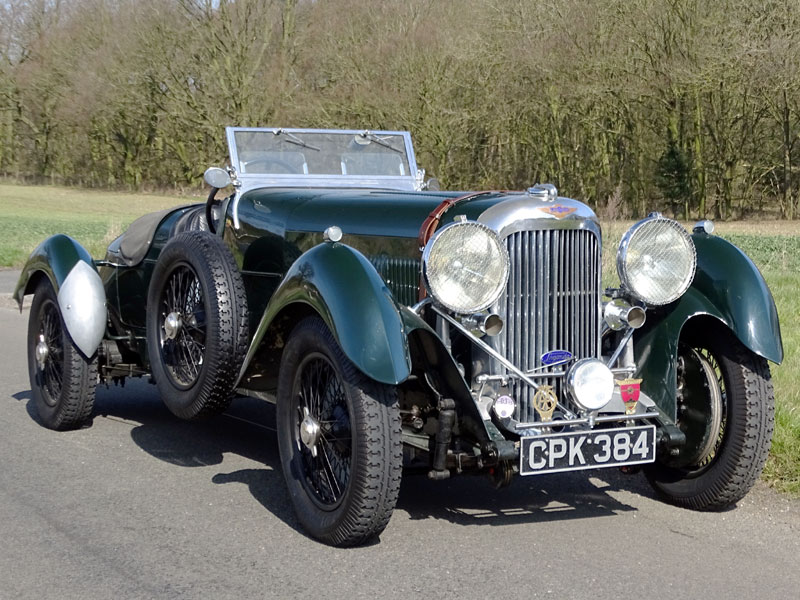 Among the rarest Lagondas ever made, the M45A measured its production span in terms of months rather than years. Notable as the last model to be signed off before Lagonda went into receivership, manufacture recommenced during Autumn 1935 once LG Motors (Staines) Ltd had taken control but is thought to have accounted for just ten saloons. An evolution of the M45 incorporating lessons learnt from the sporting M45 Rapide, the M45A utilised a modified version of the marque's proven 10-ft 9in wheelbase `ZM' chassis but with the engine set further forward so as to increase cabin space. The radiator and Girling brake system of the Rapide were adopted but otherwise the newcomer was mechanically more akin to the M45 (though, it did also share the racier model's rocker cover). Powered by an unstressed Meadows 6ESC 4453cc OHV straight-six engine, the M45A was reputedly capable of 95mph.
Compared to the `Silent Traveller' ST34 saloon body fitted to the M45, the pillarless four-door ST64 body found on its successor was not only roomier but also boasted a host of detail changes including: a larger, more rounded boot, reprofiled windscreen, flush door hinges, improved mouldings and restyled / valanced wings (complete with a central ridge). Of the ten M45A saloons built during the Summer and Autumn of 1935, it is understood that just two are known to have survived.

According to its chassis plate, Z11408 began life as one of those extremely rare M45A ST64 pillarless saloons. A letter from the Lagonda Club confirms it was first registered on 1st July 1935, although it was not delivered to its first owner, Viscount Monsell of Evesham, until 8th November. Due to its Surrey registration number it is quite possible the car served as a Works demonstrator between first registration and its November delivery date. Bolton Meredith Eyres-Monsell, 1st Viscount Monsell GBE PC, had been a decorated Naval Commander during WW1, receiving the Order of the Nile from the Sultan of Egypt. He enjoyed a lengthy and successful political career, serving as an MP for Evesham District from 1910 to 1936 and held the position of Chief Whip of the Conservative party until 1931 when he was appointed First Lord of the Admiralty.

It is not known when he sold the car but by November 1955 it was in the ownership of a K A Targett of Chiswick and in 1970 was acquired by Tony Toffolo of Paignton, Devon. According to Club records, it was he who removed the original saloon body replacing it with touring coachwork. It is believed this is the coachwork worn by the car today. The work would appear to have been completed to a good standard and CPK 384's appearance is both striking and extremely attractive. Finished in green with black seating and carpets, aero screens and Rapide style exhaust complete its sporting character.

In December 1984 the car was acquired by motor dealer, Geoff Forty, who sold it in April 1985 to a Mr H Pendlebury of Blackburn. By July 1990 it was in the ownership of a Miss Janet Simpson of Preston, from whom it was purchased by the vendor's late-father in 2008.

The engine currently fitted is numbered M45/15 and is understood to have originally been installed in chassis Z10510 before being repaired under warranty and then fitted into chassis Z10795 which is believed to have been subsequently broken up.
Featured on the front cover of Lancashire Life magazine in December 2007 (a copy accompanies the car), it is understood to drive well with a good turn of speed, although the exact current specification of the Meadows straight 6 OHV engine is unknown.

Fast, tough and beautiful, the M45 is as highly prized today (and for exactly the same reasons) as it was amongst those lucky enough to have enjoyed ownership during its 1930s heyday.
Share: