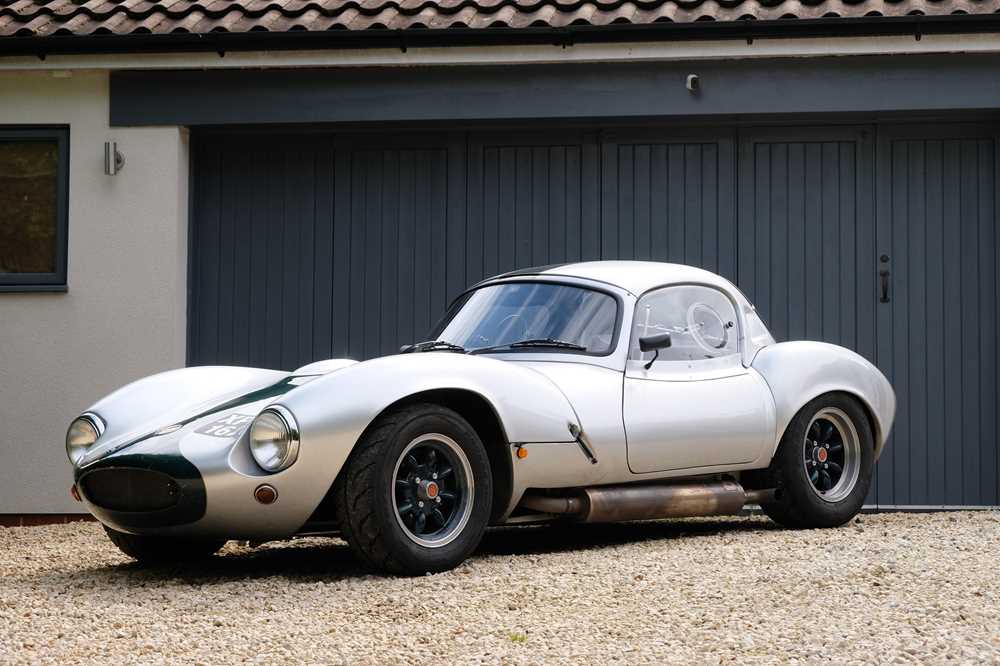 The Ginetta Cars Company was created in 1958 by the four Walklett brothers, Bob, Ivor, Trevers, and Douglas. The Company was located in Woodbridge, Suffolk, England, and produced kit cars using primarily Ford components. By the early 1960s, the Ginetta company established a good name for itself. The Ginetta G3 was their first full-fendered vehicle and by 1960 the Walklett brothers launched what would become one of their most enduring and successful models – the Ginetta G4.

By 1960, the Ginetta Cars Company would launch one of their most enduring and successful models – the Ginetta G4. The fourth model from the Ginetta Car Company, the G4, was a slight deviation from their prior products and was intended for both the road and track. It featured a multi-tubular space frame chassis construction with double wishbones, coil springs, and dampers in the front. A Ford live axle with upper trailing arms, coil springs and dampers made up the rear suspension. Drum brakes that measured eight inches, located in the front and back, kept the vehicle in the driver's control. The engine was a Ford 105E unit that produced nearly 40 horsepower, which could carry the car to speeds of about 100 mph. The engine did not produce much power, but much like the rest of the vehicle employed lightweight construction.

Over the proceeding eight years, many improvements were made to the G4, including various engine options being offered, a Coupe version becoming available, a BMC rear axle which replaced the Ford live axle, disc brakes which greatly improved the car's performance and much more. By this time, the Ginetta G4 was proving a front-runner at the national level, with multiple class wins against cars of great significance. One account by John Burton is noted: “We had quite a lot of success with the G4 but I suppose some of the most memorable races were at Castle Combe where we used to have great battles with Ron Fry’s Ferrari 250LM; real David and Goliath tussles. The crowds used to enjoy seeing our little red car going up against the mightily powerful Ferrari and, although we never beat him, we got quite close!’’.

Following the sale of the original Ginetta company, the Walklett brothers under Dare (UK) negotiated a license to produce the Ginetta G4 and G12 and the well-respected Essex-based company are still in business today fabricating shells and an extensive number of parts.

One of the aforementioned Dare cars reportedly built by the Walkletts themselves, XPF 162 was manufactured in 1998 and is presented in Metallic Silver with Metallic British Racing Green body stripe and features a complimentary black and green interior. As designed, this particular example is a relatively rare convertible offered with both hard and soft tops and was built as a competition car that is equally useable on the road and is therefore fully road legal, whilst still being eligible for a number of championships, notably the Sports Specials Championship within 750MC, Ginetta's own series, Classic & Sports Car Club Modern Classics is also an option as well as HSCC's Historic Road Sports (with some minor modification perhaps). It may also be possible to apply for a historic passport with a replacement engine.

XPF 162 is thought to be the only car powered by a 2.0 Zetec and is described as an ‘animal’ by the vendor, with the most recent Dyno printout showing 220bhp. Additional specification includes a dry-sump with catch tank and Titan oil pump kit, Alloy ‘Radtec’ radiator, 4-1 exhaust into BTB noise-compliant stainless side exit box (pre-SVA, so no cat). As well as this, the car features an Omex 600 ECU and loom, Ford Type 9 gearbox with semi-helical 5-speed close-ratio, rear Sierra LSD with uprated driveshafts, uprated adjustable dampers with bespoke Brembo/Dare front four-pot calipers and brake bias adjuster, DARE chrome rollover bars and Toyo R888 semi-slick tyres.

XPF 162 was subject to restoration in 2010 which included a full engine overhaul at a cost of some £7,000 and comes accompanied by a number of previous MOTs and invoices totaling over £26,000. The odometer displays 32,981 miles and the V5 document shows 4 former keepers. The vendor rates the condition of the bodywork and paintwork as ‘Good’, with the engine, electrical equipment, transmission and gearbox, and interior trim as ‘Very Good,' and the car is offered with an MOT valid until 18 August 2022.