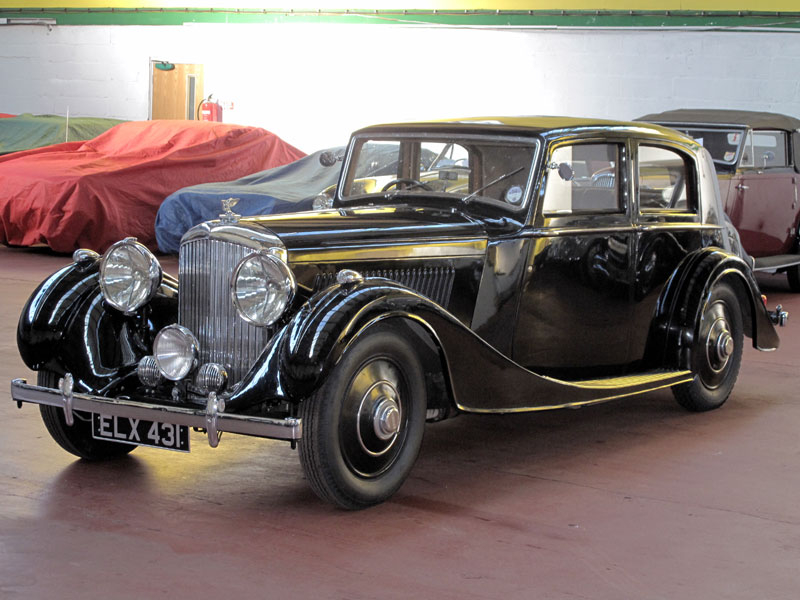 It is a sobering thought. Had Rolls-Royce not purchased its financially troubled competitor Bentley in 1931, the world would have been denied the Continental, Turbo R, Mulsanne and countless other iconic models subsequently graced with the 'Flying B'. Of particular loss for many, would have been the coachbuilt Derby Bentleys manufactured between 1933 and 1939. Their chassis was derived from an experimental supercharged 2.75-litre Rolls-Royce (codenamed Peregrine) that never saw the light of day, and power came from a redesigned and tuned version of the company's 20/25 engine, initially of 3.5-litres (3669cc). Fed by a pair of SU carburettors, the unit drove through a single dry-plate clutch to a four-speed manual gearbox containing synchromesh on the top two ratios. The suspension was by semi-elliptic springs all-round and braking by servo assisted drums.

The newcomer was introduced to the public in the appropriate surroundings of Ascot in the August of 1933, and production of these 3.5-litre cars continued into 1937; by which time 1,191 examples had been produced. The last year's allocation was manufactured alongside the incoming 4.25-litre (4257 cc) version that would ultimately supersede the 3.5-litre. The final iteration of the model was the MX of 1939, the updated specification of which included overdrive, making a fine touring car even more appropriate for the continental cruising so popular with Bentley owners of the period. A total of 1,241 4.25-litre variants were produced. Coachbuilders and body styles were the preserve of the customer and the following are just a few of the carrozzerias engaged to clothe these fine cars: Park Ward, Barker, Arthur Mulliner, Vanden Plas, Thrupp & Maberly, Gurney Nutting, Hooper, James Young, and H J Mulliner.

This handsome-looking 1937 4.25-litre Sports Saloon by H J Mulliner stands apart from most '30s classics in having belonged to just two families for the vast majority of its life - prior to entering the current ownership the last time it came to market was in 1968. The Bentley was reportedly treated to a body-off restoration around 10 years ago and repainted in Black. It was decided that the nicely patinated Brown leather trim and Burgundy carpets were good enough to leave untouched, thereby helping to preserve the car's pleasing level of originality. The engine was removed, stripped and equipped with MKVI connecting rods, main and big end shells etc, with an eye on long term durability. Overdrive was added to the specification to allow more relaxed high-speed cruising. Other improvements/upgrades comprised: a modern, full-flow oil filter; re-coring of the radiator; new rear axle pinion and fore/aft shackle pins; flashing indicators (these were discreet additions, but could be removed again if wished).

This delightfully unmolested Derby Bentley comes complete with: large sunroof; original owner's manual and follow-on service books that, between them, chronicle the details of every major period of work carried out from new; complete tool kit, all of which is original bar two spanners; and a photographic record of the restoration. For 40 years a resident of Kilmarnock, Scotland, 'ELX 431' is now seeking a new home that will provide the same level of TLC it has been accustomed to all its life to date.

PLEASE NOTE: This lot is being offered for sale by the order of the High Court. Unfortunately, the following items have been mislaid; original owners manual, follow-on service books and photographic record of restoration. Potential purchasers are advised to work on the presumption that these items will not be forthcoming.
Share: