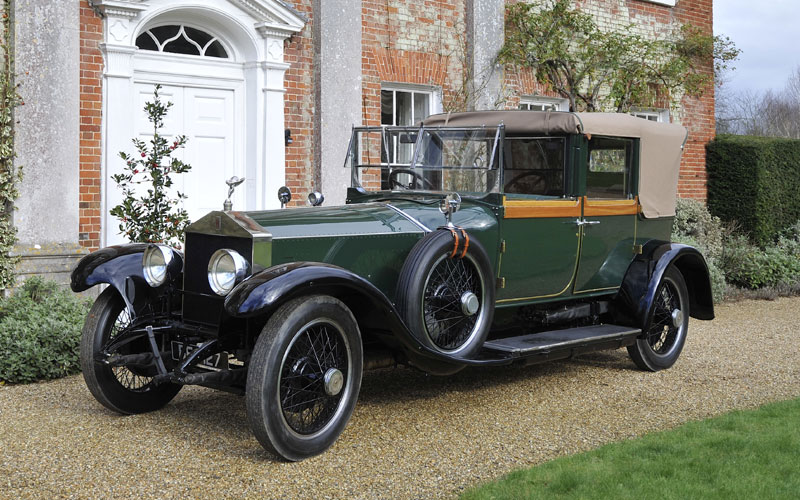 The model upon which Rolls-Royce's reputation as makers of 'The Best Car in the World' was founded, the 40/50hp debuted at the November 1906 London Motor Show. A somewhat conventional yet beautifully executed design, the newcomer was based around a massive ladder-frame chassis equipped with all-round leaf-sprung suspension, powerful rear wheel brakes and spiral-bevel final drive. Displacing 7036cc (7428cc from 1910), its superlatively smooth six-cylinder engine featured a seven-bearing crankshaft, full pressure lubrication and twelve sparkplugs (fed via a dual magneto / coil ignition system). Allied to four-speed manual transmission (though, a three-speed gearbox was utilised from 1909 to 1913), the sidevalve unit proved both wonderfully torquey and eerily quiet.

With a shrewd eye for publicity, Managing Director Claude Johnson had the company demonstrator 'AX 201' (the first 40/50hp to be known as a Silver Ghost on account of its striking livery and silver-plated fittings) take part in both the 1907 Scottish Reliability Trial and an RAC scrutinised 15,000 mile endurance run immediately afterwards. Though made to journey between London and Glasgow no less than 27 times as part of the latter ordeal, a thorough post-event examination revealed that the car had suffered no appreciable wear to its engine, gearbox, rear axle or brakes. Indeed, the only parts that factory mechanics felt compelled to change were: a steering rod tie pin, steering lever ball tip, magneto driving joint, fan belt, petrol strainer and two front wheel pivot pins. Though, as the RAC report on the World Record breaking run stated: "Had the car been in the hands of a private owner no replacements would have been considered necessary".

Possessing a legendary eye for detail, Henry Royce continued to develop the 40/50hp throughout its 18-year production life. Thus, late Silver Ghosts boasted considerably more horsepower (up from 48bhp at 1,250rpm to 80bhp at 2,250rpm) and higher top speeds (some lightweight bodied cars were timed at over 80mph) than their earlier brethren. Optional from late 1923 onwards, servo-assisted four-wheel drum brakes became standard the following year.

As stated by its accompanying copy chassis cards, this particular example - chassis number 35NK - was bodied as a Cabriolet de Ville (a.k.a. an Enclosed Drive Cabriolet) by Barker & Co. Among the renowned coachbuilder's most versatile and hence expensive designs, it could be configured in fully open, fully closed or Sedanca de Ville positions. Supplied new to Joseph Godfrey Esq. of 54 Porchester Terrace, London W2 on 3rd April 1924, the Silver Ghost returned to the factory some ten months later to be fitted with front wheel brakes and torque reaction dampers. Serving as Chief Liberal Whip in the House of Lords from 1923 to 1944, the Rt. Hon Lord Stanmore of Golding Manor, Laughton became the Rolls-Royce's second keeper in May 1928. Known to have belonged to Ayrid Holm Esq. of Kingsnorth, nr Rochester thereafter and to have sourced parts from the marque's Cricklewood service depot during the 1930s, chassis 35NK subsequently migrated to America. Reportedly restored by custodian Alfred Kohnle in the 1980s, the Silver Ghost then spent many years in the late Frank Cooke's collection. Known on both sides of the Atlantic for his expertise with Rolls-Royce and Bentley motorcars, Mr Cooke was the proprietor of The Vintage Garage in Massachusetts and doubtless worked his magic on the Cabriolet de Ville. Extensively toured by its penultimate long-term custodian Dr Norton J. Bicoll of Santa Fe (another well-known collector), the Silver Ghost returned back to England some years ago.

Chassis 35NK has recently had £27,000 spent on her, including a re-trim (Green leather in the front with Beige West of England cloth to the rear) and a mechanical overhaul by a marque specialist. The Rolls Royce is said by the vendor to 'drive beautifully' and to be 'mechanically healthy'. Pleasingly retaining its original Barker coachwork, factory-fitted engine and running gear, this elegant and imposing Silver Ghost is being offered for sale entirely without reserve. Worthy of close inspection and a potential passport to all sorts of prestigious events, chassis 35NK is offered for sale with copy chassis cards, UK V5C Registration Document and sundry other paperwork.