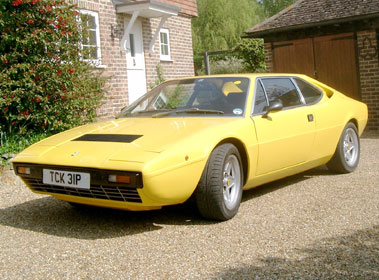 Ferrari's mould-breaking 308 GT4 was introduced at the Paris Salon in 1973. Originally marketed as a Dino, it didn't, however, gain its `prancing horse' badges until 1976. It was the first production Ferrari to feature a mid-mounted V8 engine and the first to be clothed in Bertone-designed bodywork, the angular lines of which were a major departure from the sweeping curves of the Pininfarina-penned 246 that it replaced. The chassis was a stretched version of that used for the 246 - the combination of longer wheelbase and transversely-mounted engine allowing room for a second (small) row of seats. Steering was by rack and pinion and the independent suspension featured wishbones and coil springs all-round. The 3-litre light alloy engine delivered 255bhp at 7600rpm - sufficient to endow the car with a top speed of over 150mph and a 0-60mph acceleration time of 6.4 seconds. It was mated to a traditional Ferrari `slotted gate' five-speed gearbox mounted behind and beneath the engine. Production of the GT4 continued until 1980, when the model was replaced by the Mondial. Some 2,800 examples were made during the seven years of manufacture. Its major competitors of the time were the Porsche Carrera, Maserati Merak and Jaguar E-Type.

The RHD example offered is finished in yellow with black leather trim. We understand it was previously the property of Dino marque specialist Superformance and has been the subject of much work and expense, during which time the colour has changed from its original maroon. The balanced engine is said to have completed less than 3,000 miles since it was extensively overhauled and fitted with new valves, guides, crank bearings and forged high compression pistons. We understand the gearbox has been refurbished too and fitted with new synchro rings. The car also has a new stainless steel exhaust system, new ignition units and a reconditioned radiator. A new brake master cylinder and braided brake lines have been installed and the brakes upgraded to 355 specification. The 16-inch alloy wheels are new, as are a higher geared steering rack and Koni dampers all round. The driver's seat has been lowered to enable the use of a crash helmet, the car having been prepared for, but not used in, the road registered class of the Ferrari Owners' Club sprint and hillclimb challenge. Ferrari 308 GT4s rarely come to market. Somewhat controversial at the time of introduction, the styling has gained wider acceptance with time and these cars now enjoy a loyal and growing following.
Share: