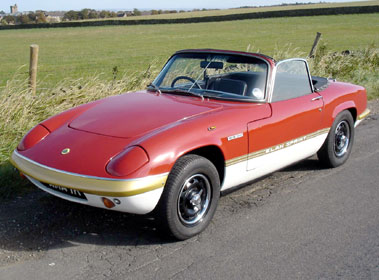 Still revered as one of the most intelligently designed, best handling sports cars ever, the Elan appeared in 1963 as a more practical proposition than the brilliant but flawed Elite. Colin Chapman's genius in making many parts do more than one job resulted in a lightweight sportster, its 680kg making it fleet of foot not just on the straights but in corners showing his true understanding of suspension dynamics. The exotic 1558cc Twin-Cam engine, cleverly based on an existing Ford unit, gave at least 105bhp, and more than 120bhp in Sprint form, endowing the tiny roadster with 0-60mph acceleration in under 8 secs and a top speed of 120mph. The Elan evolved with more creature comforts, the S4 appearing in March 1968, the Sprint in February 1971. This car's chassis number identifies it as being manufactured in July 1971 to Special Equipment Drophead Coupe UK specification as part of batch number 17 (while, its engine number `N24785' relates to a BV Weber unit). The Sprint was originally finished in Carnival Red over White - the same colour scheme it sports today - and was invoiced on 17th July 1971 before being road registered on 1st August 1971. Since entering the current ownership we are informed that the engine has been overhauled and the cylinder head converted for unleaded petrol by Twin-Cam specialist Quorn Engine Developments about 6,500 miles ago in 1998. Though, the gearbox was refurbished by M&T Transmissions in January 2008 less than 250 miles ago. A discreet Optronic electronic system is not visible, but means no more checking and adjusting of the contact breaker points. The owner feels that the GRP body may have been fitted with a new mid-front section at some point, a common repair on Elans. A new galvanised chassis was installed in 1990, about the same time that the body was taken back to its gel coat and repainted. Offered in the Lotus Gold Leaf colour scheme which echoed its Formula 1 cars at the time and which suits Elans best, this lovely example comes with a rollbar that has never been used, plus a veritable library of literature on the model, from Miles Wilkins' standard work `Lotus Twin-Cam Engine' to workshop manuals and a comprehensive ring-bound history of this car. A Tracker stolen vehicle system is fitted, which can be transferred to the new keeper. The vendor describes this appealing and desirable Lotus as being in "very good overall" condition though he notes that the cigar lighter does not work and the radio, being unsuppressed, only works when the engine is not running. In his quest to keep it original he has replaced the Jubilee clips holding various hoses with the original double wire type, and has even changed back to the original type wipers. The MOT runs until May 2010 and the road tax is of course free.
Share: