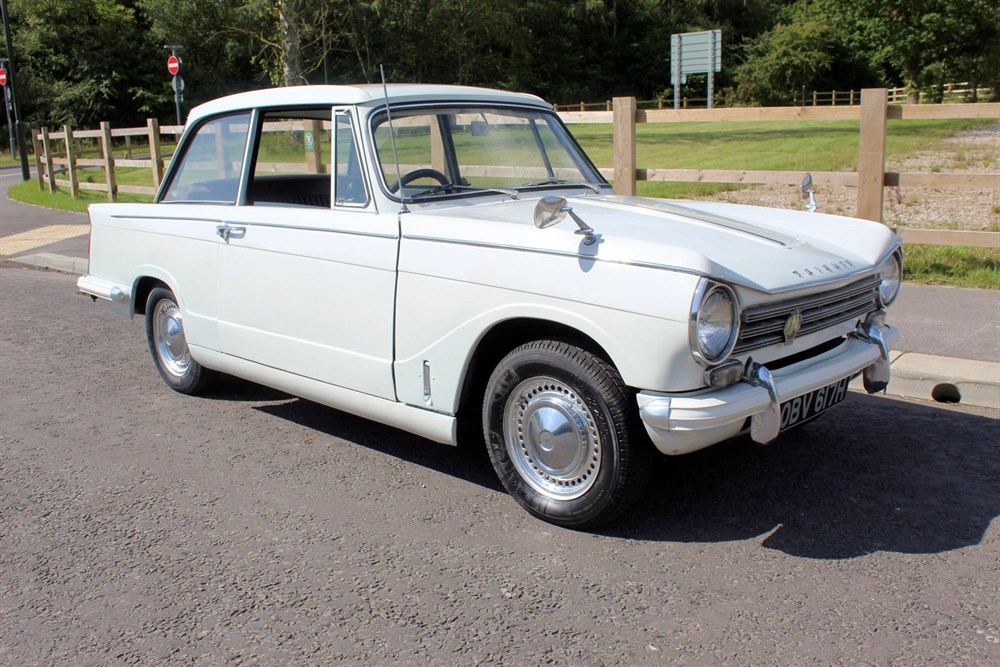 - Only 53000 miles with supporting history

- Restoration work carried out by TR Enterprises in 1999

The Triumph Herald was introduced by Standard-Triumph of Coventry in 1959 and made through to 1971. The body design was by the Italian stylist Giovanni Michelotti, and the car was offered in saloon, convertible, coupé, estate and van models, with the latter marketed as the Triumph Courier.

Total Herald sales numbered well over half a million. The Triumph Vitesse, Spitfire and GT6 models are all based on modified Herald chassis and running gear with bolt-together bodies

In October 1967 the range was updated with the introduction at the London Motor Show of the Herald 13/60. The 13/60 was offered in saloon, convertible and estate-bodied versions. The sun-roof remained available for the saloon as an optional extra rather than a standard feature.

The front end was restyled using a bonnet similar to the Triumph Vitesse's and the interior substantially revised though still featuring the wooden dashboard. Interior space was improved by recessing a rear armrest in each side panel. The engine was enlarged to 1296 cc, essentially the unit employed since 1965 in the Triumph 1300, fitted with a Stromberg CD150 carburettor, offering 61 bhp (45 kW) and much improved performance. In this form (though the 1200 saloon was sold alongside it until the end of 1970) the Herald Saloon lasted until December 1970 and the Convertible and Estate until May 1971, by which time, severely outdated in style if not performance, it had already outlived the introduction of the Triumph 1300 Saloon, the car designed to replace it and was still selling reasonably well but, because of its labour-intensive method of construction, selling at a loss,
Share: