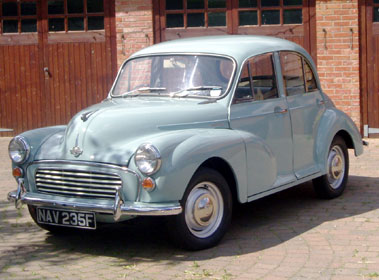 Debuting alongside Jaguar's superbly glamorous XK120 at the 1948 London Motor Show, the Morris Minor was somewhat overshadowed. An exceptionally advanced design, the Minor was the brainchild of Sir Alec Issigonis. With a monocoque chassis, independent torsion-bar front suspension, all-round hydraulic drum brakes and rack and pinion steering the model possessed excellent handling but lacked the horsepower to exploit it. However, things improved markedly when the four-cylinder 1098cc OHV A-series equipped Series V was introduced in 1962. With up to 45bhp and 60lbft of torque being transmitted to its rear wheels via a four-speed manual gearbox, the Series V was reputedly capable of 77mph.

Finished in Smoke Grey with blue upholstery, this particular example is described by the vendor as being in "good" condition with regard to its engine, four-speed manual gearbox, electrical equipment, interior trim, bodywork and paintwork. Thought to have had three previous keepers the first of whom was Mrs Elise Irene Gee, the Minor then passed to Mr Cutteridge (reputedly a farm employee) before being reacquired by Mr Thomas Gee in 1983 and entering the current ownership some twenty-three years later. Apparently off the road and dry stored for a good bit of its life, `NAV 235F' (formerly registered as `MFL 595F') is said to "drive well"; the vendor adding that the saloon "would make a good starter classic". Riding on five new tyres, it is hoped but not guaranteed that this nicely presented Morris Minor will possess a fresh MOT certificate by the time of sale.