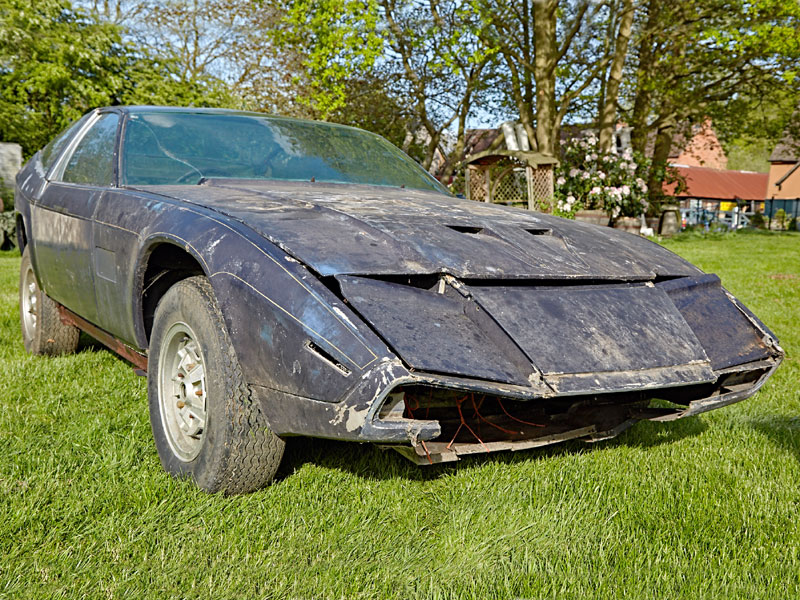 - Hidden from public view for the past 40 years

- Displayed at the Montreal Motor Show and Geneva Salon during 1972

A recent letter to the vendor from the manager of Aston Martin Heritage Operations that accompanies this 'barn find' sums the car up perfectly: "I am able to confirm that the above vehicle was shipped to Ogle Design of Letchworth, Herts in 1971 by Aston Martin as the prototype for the Sotheby Special Project, financed by W.D. & H.O. Wills Ltd. This vehicle is the first of three Sotheby Specials produced at Ogle Design."

The vendor purchased this historically interesting Aston Martin (chassis No. DBSV8/10381/RC) very much in its current state in the mid-1970s from a Mr Pepper, who was then employed by Ogle and had responsibility for organising the car's disposal. Research into the cars serial numbers have proved the prototype fuel-injected engine to have been built in 1967 and the DBS V8 chassis in 1970-1971. Ogle constructed the bodywork from glassfibre, while the extensive glasshouse above the waistline was formed in Perspex, supported on a tubular frame of Reynolds 531 - a steel once very popular with the cycle racing fraternity. The rear panel was made of a single sheet of satin stainless steel with holes inserted for no less than 22 rear lamps - the harder the driver braked, the more lights were illuminated. The headlamps were secreted behind a pair of pneumatically operated panels that would automatically drop down when the lamps were in use. Also of note is that the car had a single transverse rear seat, presumably making the Ogle the only post war three-seater Aston Martin.

The vehicle was finished in Dark Blue adorned with Gold pin striping and unveiled as a centrepiece of the Montreal Motor Show of January 1972. It also appeared at the ensuing Geneva Salon a couple of months later, and was reviewed by Raymond Baxter for the then popular television programme 'Tomorrow's World'. The Sotheby Special certainly seems to have impressed Motor magazine, as they devoted their January 15, 1972 front cover to the car. Unfortunately, history relates that Wills's Sotheby brand of cigarette was not a great success and, now redundant, the motor show car (that had never been road registered), was partially stripped for parts and placed in storage. Indeed, according to the vendor, it has seen the inside of several barns over the subsequent 40 plus years, in particular - Bonners Farm near Luton, Tallents Farm near Hitchin and Crook Corner Riseley.

One way and another it has been hidden from public view for a very long time until now, when it being offered for sale in genuine 'barn find' condition. It is still equipped with its manual five-speed gearbox. The paintwork is original but, like the rest of this historically fascinating vehicle, is now in need of restoration. The vendor informs us that some of the Triplex glass remains with the car, as do the door cards and radiator, and that the alloy wheels were apparently re-painted in the late '70s. Aston Martin has volunteered that it will be happy to help the next keeper get the vehicle road registered and would also be delighted to carry out the restoration if required. What better project for the upcoming winter!
Share: