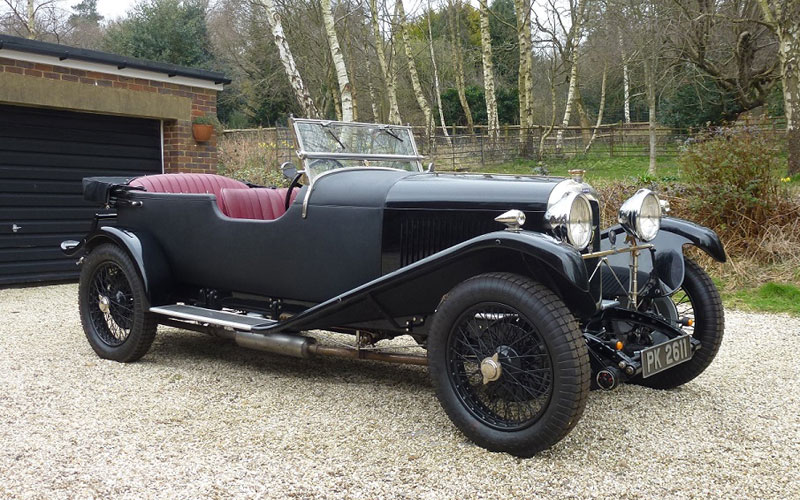 - All weather gear and ready for touring

"In brief, the two-litre Lagonda may be said to combine the lively performance of a sports car with the quiet manners and convenience of a tourer, the result being a vehicle which is a sheer delight to handle, while it will convey four people in comfort over long distances at a high average speed" (Autocar, 16th December 1927)

Some two years after its 1925 Motor Show launch, the Lagonda 14/60 morphed into the Two-Litre High Chassis model. Built around a sturdy ladder frame chassis equipped with semi-elliptic leaf-sprung suspension and four-wheel drum brakes, it was powered by the same 1954cc engine as its predecessor. Designed by Arthur Davidson, this imposing looking four-cylinder unit featured twin high-mounted camshafts and fully machined hemispherical combustion chambers. Developing some 60bhp @ 3,500rpm, it was mated to a four-speed manual gearbox and gave a top speed of between 70mph and 80mph.

First registered on 28th July 1928, a letter from the Lagonda Club advises this example passed through the hands of Dobsons of Staines (Lagonda's outlet for trade-ins) in 1934, and by 1948, was owned by F R Ponsford-Jones of Co. Meath. He owned a number of Lagondas and decided to make one good one using parts from others in his collection. He fitted two-seat DHC coachwork which was replaced by touring bodywork around 1960. Fitted with a low chassis front axle and Z-Type rear axle, it retains its Zenith carburettor whilst benefiting from a refurbished Autovac system.

Complete with all weather gear and ready for touring, PK 2611 is understood to have been restored on the Isle of Wight by an aircraft engineer around 1990 and has been in the current ownership since 2009. A previous winner of the Robbie Hewitt Trophy for best Lagonda at Brooklands, this lovely example is accompanied by a copy article of the 1940s build by Mr Ponsford-Jones, instruction book, restoration photographs, assorted invoices and a Swansea V5 document.
Share: