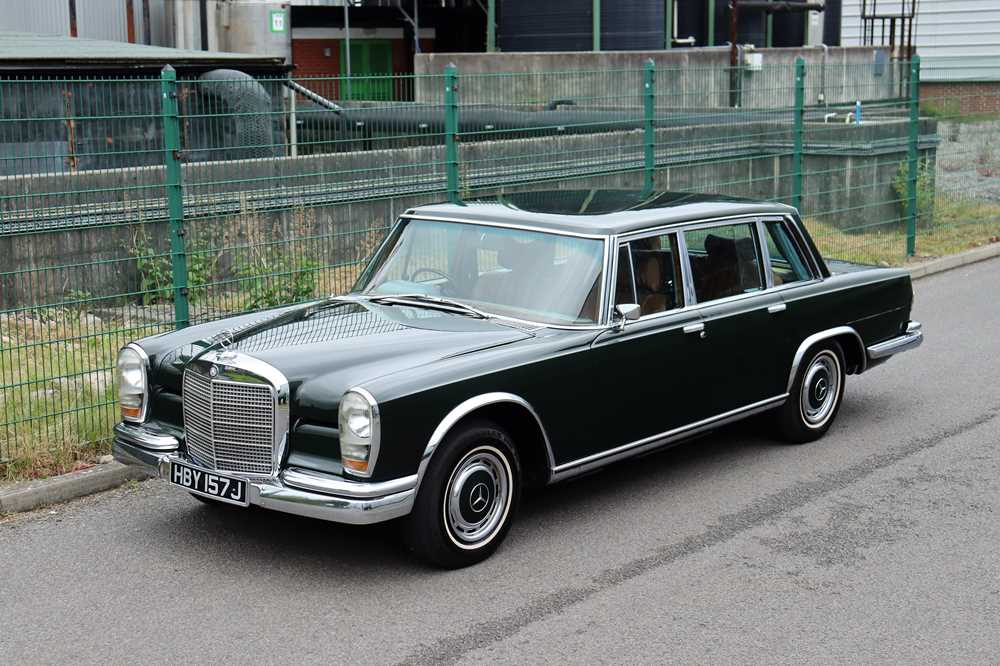 Unveiled to a select group of journalists at Val de Poix in Belgium on 28th August 1963, the Mercedes-Benz 600 was a mind-blowing achievement. Dubbed ‘The Super Mercedes’ by its creators, the newcomer took eight years to develop. Redefining what customers could expect from a high-end luxury car in terms of passenger comfort, safety and performance, the 600 was based around a monocoque bodyshell equipped with all-round independent air-sprung suspension (self-levelling to the rear) and four-wheel disc brakes. Chosen because it was lighter, quieter and smaller than its electrical equivalent, the hydraulic system which controlled the operation of the windows, seats, heater vents, shock absorber adjustment, central locking and boot lid etc ran at 150-bar. Handbuilt and bench tested for 265 minutes, the model’s 6.3 litre SOHC V8 was conservatively rated at 250bhp and 369lbft of torque. Allied to four-speed automatic transmission, it endowed the Mercedes-Benz flagship with a nigh on 130mph top speed. Contemporary road testers waxed lyrical about the 600’s ride comfort, handling prowess and pace with some even suggesting the four-door saloon would embarrass many a sportscar cross country. Exquisitely trimmed, ‘The Super Mercedes’ could be specified with a bewildering array of extras such as a fridge, cocktail cabinet, glass division and fitted luggage etc. Many were fitted with air conditioning, illuminated rear picnic tables and privacy curtains. Styled by Paul Bracq and available in short or long wheelbase guise, the extended version could also be had with a landaulet roof and six doors. Fearsomely expensive, the 600 proved a hit with celebrities, tycoons and rulers around the world. Notable owners including Aristotle Onassis, Elizabeth Taylor, Jack Nicholson, Coco Chanel and Idi Amin. Of the 2,677 built from 1963-1981, just 126 were UK-supplied.

According to copy Mercedes-Benz paperwork on file, chassis 001909 was supplied new to Lord Aschcombe. Henry Cubitt, 4th Baron Ashcombe served in the RAF during WW2 before becoming chairman of Holland, Hannen and Cubitts the family construction firm. The London-based Consul-General for Monaco between 1961 and 1968, he was also notable as the uncle of, and godfather to, Camilla Duchess of Cornwall. After eleven years’ service to Baron Ashcombe, the 600 was sold to William McGill of Glasgow who kept it until 2014 commenting to a subsequent custodian that he never had any mechanical issues with the engine and gearbox. Indeed, Mr McGill recalled enjoying trips to Mercedes-Benz’s Stuttgart headquarters for servicing and only ever experiencing a major problem with the driver’s seat hydraulics (since cured). The luxury saloon’s third keeper had bases in the UK and Australia. As well as having chassis 001909 repainted in its current Dark Velvet Green and retrimmed in Cognac leather during 2014, the following year saw him have the Mercedes-Benz uplifted from Monaco to renowned 600 specialists Worle Fahrzeugtechnik of Sygenstein, Germany for attention to its air suspension, hydraulic system, brakes, alternator, shock absorber adjuster and engine (the latter receiving a new water pump etc). The associated bills are said to total some €28,000. Bought by Simon North in October 2015 and further treated to assorted new ignition system components and fresh tyres all round, ‘HBY 157J’ was sold to its current registered keeper during November 2018. In addition to a stainless-steel exhaust system, the past few years have seen this ‘Super Mercedes’ benefit from sundry re-chroming and new door rubbers. A car that may well have played host to the future Queen of England, this much loved 600 is offered for sale with V5C Registration document, parts book handbook and history file.