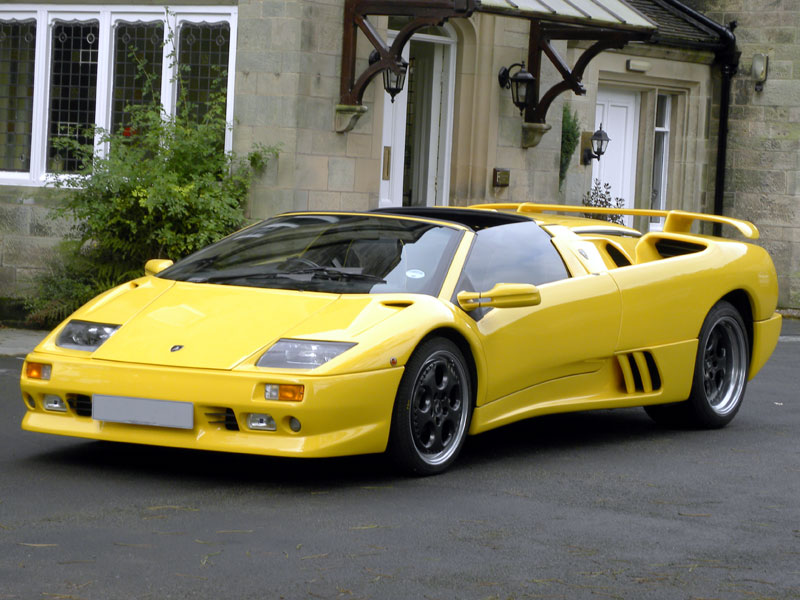 Said to have cost 6,000 million lira to bring to market, the Diablo was Lamorghini's replacement for its dramatic Gandini-styled predecessor - the Countach. The maestro was commissioned to pen the Diablo too, but the company fell into the Chrysler's clutches while the newcomer was in development, and his designs were ultimately smoothed out by the men in Detroit; much to his reputed chagrin. Placed on sale in January 1990, the original version was powered by a 5.7-litre, 48-valve version of the company's existing V12 engine. This delivered some 492bhp - sufficient to rocket the mid-engined Diablo to 60mph in a little over 4.0 seconds and on to a top speed of over 200mph.

The VT version followed in 1993, the most evident difference being its four-wheel rather than rear-wheel drive system (VT stands for viscous traction). Other improvements included: four-pot brake callipers and larger front brake cooling ducts; bigger air intakes for the rear arches; electronically adjustable dampers; power steering; and minor refinements to the engine. The VT Roadster followed in 1995 and was most notable for its electrically-operated carbonfibre top that was stored above the engine cover when not in use. The other updates were primarily cosmetic, including revised 17-inch wheels.

The right-hand drive Lamborghini Diablo VT Roadster being sold is believed to one of just three built to this particular 'exposed headlamp' specification and has certainly enjoyed a celebrity lifestyle. Once owned by footballing rock star Rod Stewart, it has been the property of former professional wrestler Kendo Nagasaki since August 2007, and has had just four keepers in total so far. Between them it seems they have accrued as little as 19,200 miles; a fact apparently confirmed by the following service history:

The vendor currently grades the eye-catching Diablo's bodywork, Yellow paintwork, Yellow-piped Black leather interior trim, V12 engine and five-speed manual gearbox as all being in in "A1" order and is selling it complete with Tracker and an MOT valid until July 2013. The perfect Christmas present for anyone with celebrity tendencies.
Share: