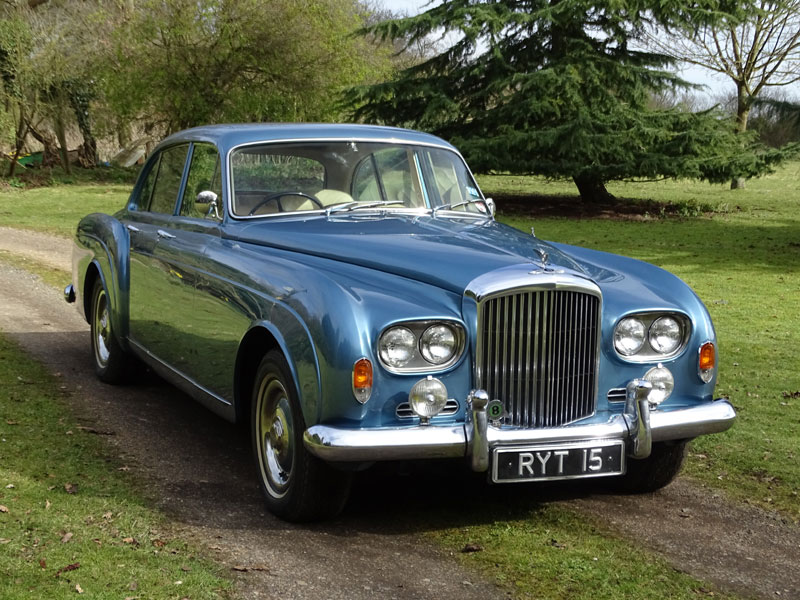 - Entered from a private collection and current ownership since 1987

Introduced in Autumn 1962, the S3 Continental was notable as the last Bentley to be coachbuilt on a separate chassis. Powered by a 6230cc OHV V8 engine allied to four-speed automatic transmission and reputedly capable of nigh-on 120mph, the newcomer was ferociously expensive. One of the more striking designs available, H.J. Mulliner's 'Flying Spur' made precious few stylistic concessions to its four-door practicality. Inspired by the heraldic symbol bestowed upon the Scottish Johnstone Clan for helping Bonnie Prince Charlie escape the English on horseback, the model's distinctive moniker came courtesy of H.J. Mulliner's Managing Director, Harry Talbot Johnstone Esq. Understandably popular among contemporary celebrities such as Jayne Mansfield, Fanny Craddock, Sir John Mills, Harry Belafonte and Keith Richards, just 312 S3 Continentals were completed between 1962 and 1966. However, H.J. Mulliner only bodied 82 chassis to its design number 2011.

According to its accompanying copy chassis cards, this particular example - chassis BC92LXB - was supplied new via Saad & Traad of Beirut to Sheikh Mubarak Abdullah Al Hamad Al Sabah (the extended Al Sabah family includes the present Emir of Kuwait). Originally finished in Carribbean Blue with Off White leather upholstery - the same combination it pleasingly sports today - the Bentley was also specified with Colonial suspension, electric windows all-round, Dunlop white-sided tyres and a 'Made in England' bulkhead plaque. Apparently resident in America thereafter, the Flying Spur was first UK road registered on 7th February 1972. Numerous copy invoices on file from Rolls-Royce and Bentley specialists P&A Wood show that they have known the decidedly elegant four-seater for some forty odd years. As well as looking after the Bentley for previous custodians Bernard J. Crowley Esq., J.J. Burton Esq. and Ian Scoggins Esq. not to mention installing a heated rear window and air-conditioning, the renowned Essex-based firm sold it to the vendor on 5th February 1987 at an indicated 41,715 miles.

The subject of an article in the Third P&A Wood Newsletter entitled 'The Missing Registration Document and the Mouse!' chassis BC92LXB was described thus: 'We had a Bentley S3 Flying Spur with very low mileage for sale. It was a car which had been imported from America and which we had converted from left- to right-hand drive for a customer who wanted a very good low mileage example . . . It soon became apparent that there was a mouse in the car. We tried everything to find the mouse but just like in the cartoons it was probably laughing at us while we almost dismantled the whole car! . . . The history file had been left on the back seat and everything was there except for the Registration Document . . . The buyer took the car for the weekend and on the Monday telephoned Paul to say he had found the document. "Where was it?" asked Paul. The buyer explained that when he switched the heater on it blew out all over him! The mouse had used it for its nest in the heater ducts. He took it in good spirits and sent us all the pieces in an envelope. We had the car back but never did find the mouse!'

Assorted old MOT certificates suggest that the Bentley has covered just 17,000 or so miles over the last twenty-nine years. Part of an impressive private collection during that time (and stabled alongside several other Continentals), the sports saloon has benefited from in-house maintenance plus attention to its ignition (2002, 2008), brake system (2008, 2010), windscreen seal (2010) and fuel pumps. Treated to a £14,730 bodywork restoration / respray in 2009-2010, more recent work has seen the wood veneers refinished and the sump cleaned out. A globe-trotting Flying Spur with an enviable history, 'RYT 15' shows a highly credible 58,000 miles to its odometer. A great way to share Bentley Continental motoring with friends.
Share: