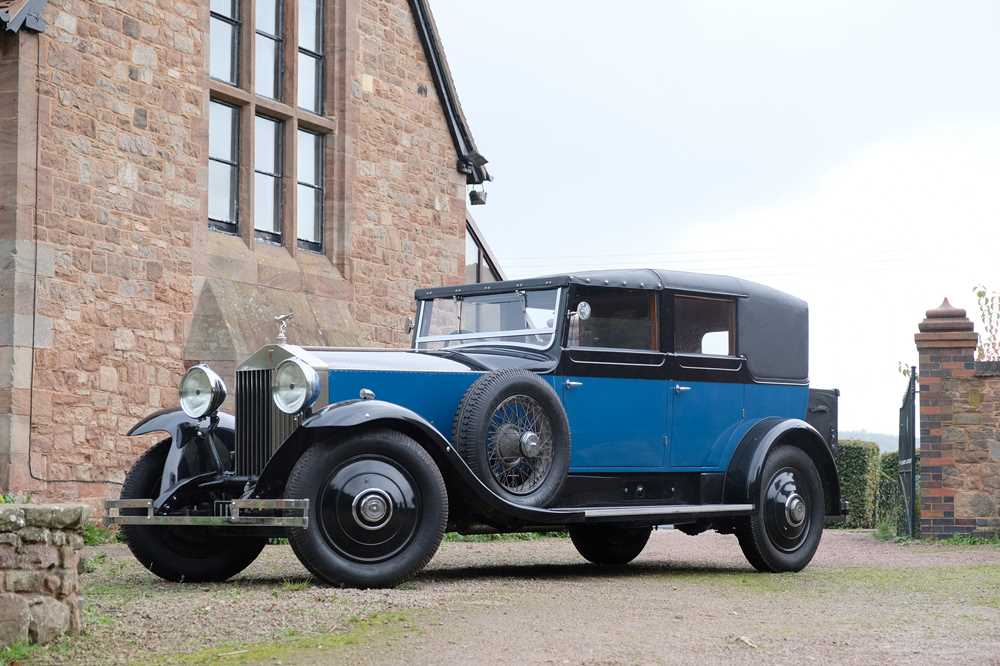 After seven years of experiment and test, the 40/50hp six-cylinder Phantom chassis emerged, and is offered to the public as the most suitable type possible for a mechanically-propelled chassis under present-day conditions" (New Phantom launch brochure, May 1925).

By 1925, the Rolls-Royce Silver Ghost had been upstaged by a younger generation of more technically advanced luxury cars. The glory days of the 1913 Alpine Trials had long passed and both Henry Royce and Rolls-Royce sales manager Claude Johnson felt the need to produce a new claimant to the title 'best car in the world'. Just as the competition between car manufacturers was becoming increasingly fierce, so that between rival coachbuilders had intensified correspondingly. With the arrival of each faster, more powerful chassis came the opportunity to construct ever more lavish, sophisticated coachwork. To ensure that their cars could be fitted with the finest bodies in the world, Rolls-Royce introduced the 'New Phantom'.

While its tapered channel-section chassis, four-speed manual transmission, supple springing (semi-elliptic front, cantilever rear) and ingenious gearbox-driven servo assisted four wheel brakes owed much to its predecessor, the Phantom's 7668cc engine was all new. Quoted as being an impressive 33 per cent more powerful than the Ghost's unit, it featured overhead valves set in a detachation in the UK until 1929, by which time some 2,269 chassis had been delivered.

Chassis 116 KR still retains its original registration ‘UV 1377’ and was registered on 03 July 1929 as long wheel base and delivered to an S Harris Esq of 80 Wardour St, London. At that time, Wardour St was known as Film Row, with approximately 40 film companies including Warner Brothers with offices located there. There is little in the way of history for this car until a year later.

In 1930, UV 1377 is described on the logbook as a coupe finished in black with red wheels, and is under the ownership of Peter Edward Mazzina. Mazzina was the companion and associate of Maundry Gregory and manager of the Ambassador Club, London, which was infamous for entertaining the likes of the Prince of Wales, codenamed ‘Number 1’, and for various illicit activities. The car remained under his ownership until 1935.

1935 saw UV 1377 enter the ownership of Thomas Ireland & Sons Ltd of Lancaster, bus company and funeral directors. During this custodianship, this Rolls-Royce would be rebodied as ‘Saloon Hearse’, finished in Blue and Black. The car would remain with the company until 1965, before the vehicle in transferred to the ownership of Hillcrest Coaches of Settle, Yorkshire, for just one year until sold to an M.J Hollinshead.

Fast forward to more recent years, and UV 1377 would be commissioned by its previous owner for restoration in 1996. Photographic history shows the car in its Hearse form, followed by a brief spell in a Doctor’s Coupe body. The vehicle would then receive the Sedanca body it retains to this day.

Purchased as a restoration project to be completed by the current owner, UV 1377 still retains its original engine numbered ‘KU 95’ and is now in finished form, having had a significant amount of work completed including overhauls to the cylinder head, magneto, dynamo and autovac. The crankshaft damper received overhaul with Ristes Motor Co and the carburettor with Fiennes Restoration. As well as this, the bottom end was inspected with clearances checked, camshaft followers inspected and radiator flushed. The work didn’t stop here, with the interior re-upholstered and completed and sedanca top made and fitted, with complementary box under the running board fabricated and fitted for parts of the sedanca top when down. Receipts total some £12,500 in the last 18 months, with the vendor also informing us of much work where no receipts were obtained.

UV 1377 comes accompanied with a host of paperwork, including copies of the chassis bill of sale, inspection reports, delivery papers, previous logbooks, photographic evidence of the start of the restoration and a significant number of invoices for works carried out, the vendor reports a slight ticking when the engine is cold, which proceeds to disappear when the vehicle has warmed up. Due to this, they rate the condition of the engine as ‘Average to Good’. The paintwork, transmission and interior trim are rated as ‘Good’ with the bodywork and electrical equipment ‘Very Good’.