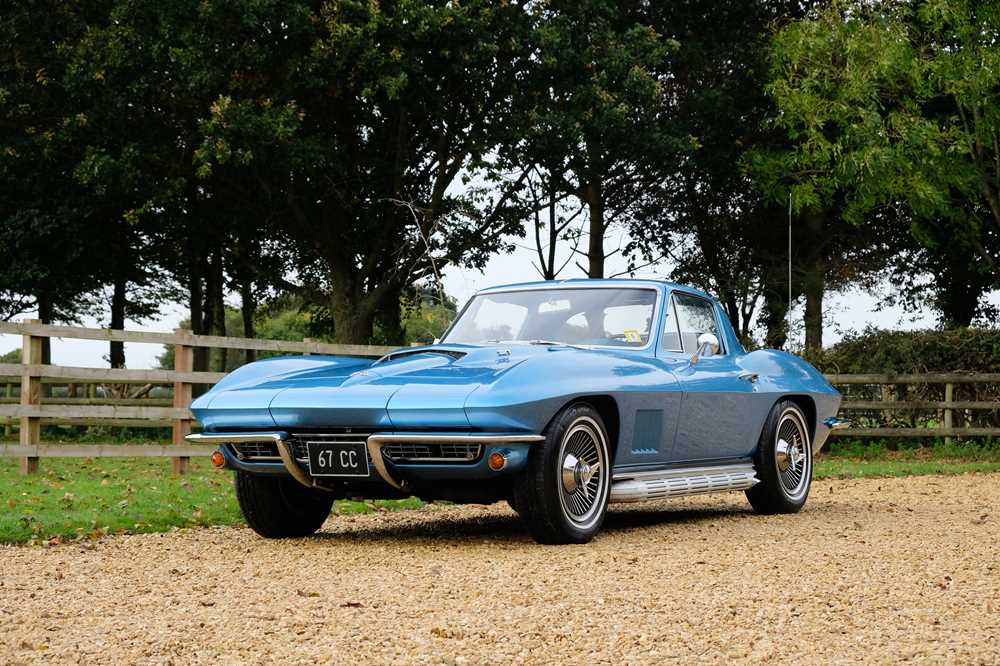 Growing up from its first foray as an anaemic six-cylinder roadster in 1953, the Corvette matured fast, gaining V8 power in 1955 and packing more muscle (such as a fuel-injected 283 cu in V8 in 1957), options and ornate styling cues with every year. In 1963, the second generation debuted with clean, sharp-edged styling by Larry Shinoda that introduced coupe bodywork to the Corvette for the first time. This C2 style lasted until 1967 after which it was replaced by the C3 Stingray; these 'mid-year' cars are some of the most collectible Corvettes today. Four-wheel disc brakes arrived in 1966, along with the option of the big-block 396 cu in engine, but even the base 327 cu in powerplant gave 300bhp. The 1967-year models benefited from five years of development and are acknowledged as being the best of the C2 line. Indeed, the solid lifter L88 427/430 would become most sought-after Corvette ever; with only 20 examples being produced.

Model year improvements for the 1967 line included; five smaller front fender vents replacing the previous three larger ones, flat-finish rockers without ribbing creating a lower, less chunky appearance, a single reversing light mounted above the licence plate whilst the previous model’s wheel covers gave way to slotted six-inch Rally wheels with chrome beauty rings and wheelnuts concealed behind chrome caps. Interior alterations were modest and included revised upholstery, whilst the handbrake was moved from beneath the dash to between the seats. With potential buyers anticipating the car's overdue redesign, sales for the Sting Ray's final year totalled 22,940, down by over 5,000 units from the results for 1966. Meanwhile, Chevrolet readied its third-generation Corvette for launch in the 1968 model year.

Offered in its original shade of Marina Blue with matching bright blue interior, this particular example was subject to a ‘frame off’ restoration in the US prior to its import to the UK in 2007. It has had just two owners since, forming a part of the vendor’s private collection for the past five years. The extremely appropriate registration mark ‘67 CC’ (1967 Chevrolet Corvette) is included in the sale. In addition, the car boasts an impressive factory specification, including four-speed manual transmission, side-mount exhaust system and cast aluminium bolt on wheels.

Currency displaying 29,291 miles on its odometer, 67 CC was subject to a full service in February of this year at a cost of £1073. Accompanying the car is a comprehensive history file which includes an owner’s manual, a number of previous MoTs, authorisation papers and shipping documentation together with a number of invoices.