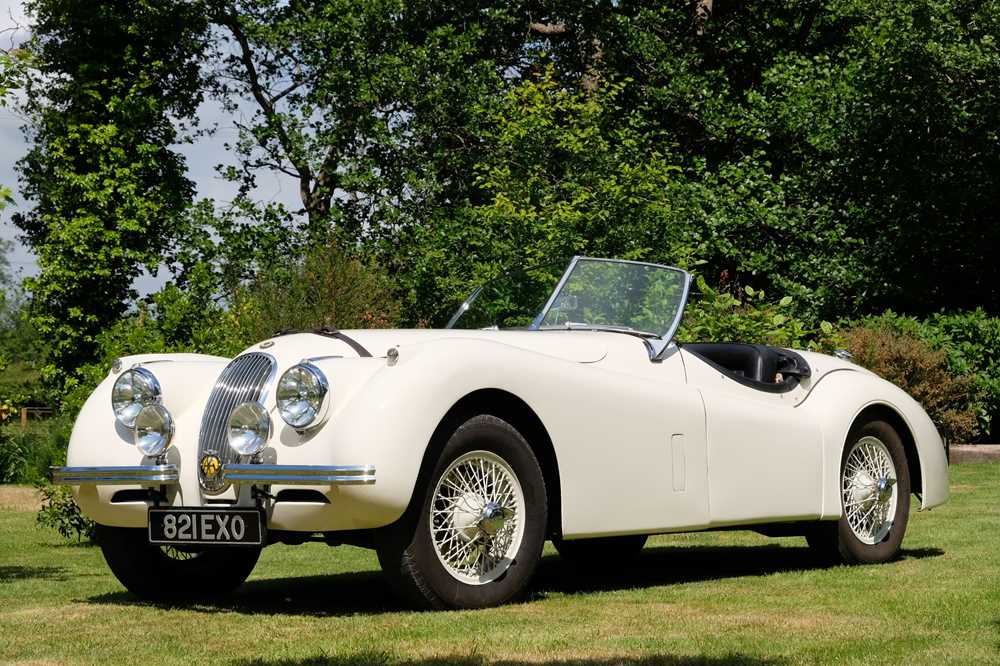 Launched at the 1948 Earls Court Motor Show, the Jaguar XK120 Roadster caused a sensation. Penned by Sir William Lyons, the model's sensuous lines seemed almost impossibly glamorous to a country still feeling the effects of rationing. While the 120mph top speed that its name signified soon became the stuff of legend. Literally flooded with orders, Jaguar began limited hand-built production soon thereafter (although, it was not until 1950 that the factory was sufficiently 'tooled-up to discard aluminium in favor of steel for the curvaceous bodywork). Based around a cruciform-braced box-section chassis equipped with independent torsion-bar front suspension, a leaf-sprung 'live' rear axle and hydraulic drum brakes, the lithe two-seater proved equally adept on-road or track winning both the RAC TT and Alpine Trial during 1950 (the former victory coming at the hands of Sir Stirling Moss). Credited with 160bhp and 190lbft of torque in standard tune, its legendary 3442cc DOHC straight-six engine was allied to four-speed manual transmission. Arguably, the defining sportscar of its generation, a perilously shaky post-WW2 British economy gave the Coventry manufacturer little choice but to concentrate on overseas sales.

EXO 821 (or Chassis 661104) is one of the more sought-after ‘home market’ Jaguar XK120s, delivered new via Rossleigh Jaguar, Edinburgh after leaving Brown’s Lane in September of 1953, at that time in British Racing Green with Tan interior and Fawn hood.

EXO 21 has been in its current combination of Old English White with contrasting Black leather interior since at least 1987, if not earlier, and was entrusted to renowned Jaguar specialists Collier Street Garage in 2004 by its previous owner, who had the car between 1987 and 2017. The brief was to ‘comprehensively restore the car to fine running condition’, and Collier Street garage did just that. The engine was overhauled with replacement pistons and cranks, any areas of corrosion rectified, a ‘bare metal’ respray, replacement wiring loom, and much more, with invoices totaling in excess of £63,000. Enhancements at this time included front disc brakes, an aluminium radiator with a Kenlowe fan, electronic ignition, and more. The restoration was completed some 9 years later, in 2013.

EXO 21 was acquired by its current owner less than 2000 miles after restoration in 2017 and the odometer currently displays 17,746. The vendor rates the condition of the bodywork, engine, electrical equipment, paintwork, transmission, and interior trim all as ‘Very Good. Included with the vehicle are invoices totaling approximately £75,000, several previous MOT certificates, and the original continuation logbook.

This vehicle also comes accompanied with a Heritage Certificate.

The vendor informs us he has completed some