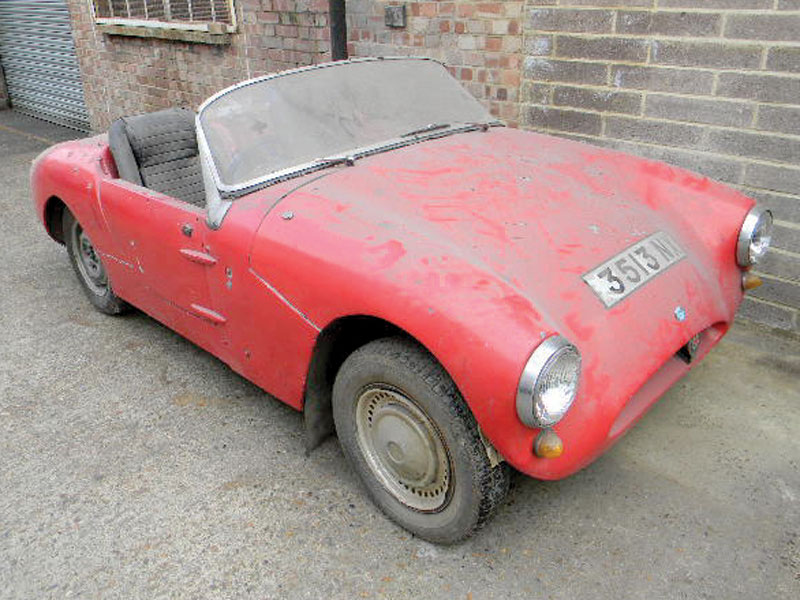 Fairthorpe Cars were produced in the leafy village of Chalfont St Peter, Buckinghamshire from 1954 to 1976. The company was founded by the enterprising Air Vice Marshall Donald Bennett CB, CBE, DSO who, at a remarkably young age, had already become a worldwide expert on air navigation, been the youngest AVM in the RAF, founded an airline, been the first pilot to make a commercial flight from Heathrow, and been an MP by the time he decided to try his hand at car manufacture. The first result, the Atom, was a two-seater microcar that was powered by a rear-mounted motorcycle engine. This was not a great success, but the company's fortunes improved following the arrival of John Green from Daimler. Bringing new standards of engineering, he helped develop the Atomotor (another motorcycle-engined device) and the Electron, which soon became Fairthorpe's prime product. The light, front-engined two-seater was clothed in a fibreglass body made by Microplas of South London. Power was initially provided by a 1098cc Coventry Climax engine. With anything up to 100bhp on tap, these cars had impressive performance and acquitted themselves well in competition. The downside was the expense of the engine, so an alternative Triumph-powered version was offered for general road use. Dubbed the Electron Minor, it was initially fitted with a Standard 10 unit, but as time went by this was usurped by that from the Herald and, eventually, the Spitfire. From 1959 onwards, the Electrons could be bought in kit form for as little as £450. Production estimates vary, but several hundred were sold, with production peaking at 20 cars per month.

The right-hand drive Fairthorpe now offered is a 'barn find' Electron Convertible that left the factory in 1960. It has a Red body and Black vinyl interior. The museum inform us that the engine still turns and that the fuel tank needs welding. However, these are comparatively unsophisticated cars and a complete restoration should be neither overly demanding nor expensive to perform - an interesting project that would resurrect a rare car for fun on road or track. '3513 NX' is being sold without tax or MOT and at No Reserve.
Share: